When you think about technology, you usually think of things evolving in a straight line. For example, punch cards led to tape drives, which led to floppy drives, which led to CDs, and so on. But every now and then, technology throws you for a loop and goes in reverse. For instance, old-school vinyl records have been rebounding in popularity. Ironically, the reason for this is MP3s. Anyone who wants the most compact format isn’t buying a CD anymore. They’re buying a digital download. On the other hand, if you’re going for top quality, why settle for a CD when you can get vinyl?

Similarly, projectors used to be the way to enjoy home video. But as video cassettes entered the market in the 1980s, projectors fell out of favor with most consumers. A VHS player was far more affordable than a projector, was easier to use, and easier to find movies for. Throughout the 80s, 90s, and 2000s, projectors languished, relegated to displaying PowerPoint presentations in offices.

But new and improved technology has caused projector prices to go down. At the same time, digital media has made it easy to play both Hollywood movies and home videos. So it should come as no surprise that many people are once again putting a projector in their living room.

Today, we’re going to be comparing two different projectors. We’re going to look at the similarities and differences between the APEMAN 4000L Mini Projector and the ManyBox Mini Projector. We’ll see how they stack up on a variety of metrics, from video quality to ease of setup. Once we’ve done that, we’ll be ready to render a final verdict. Let’s get started! 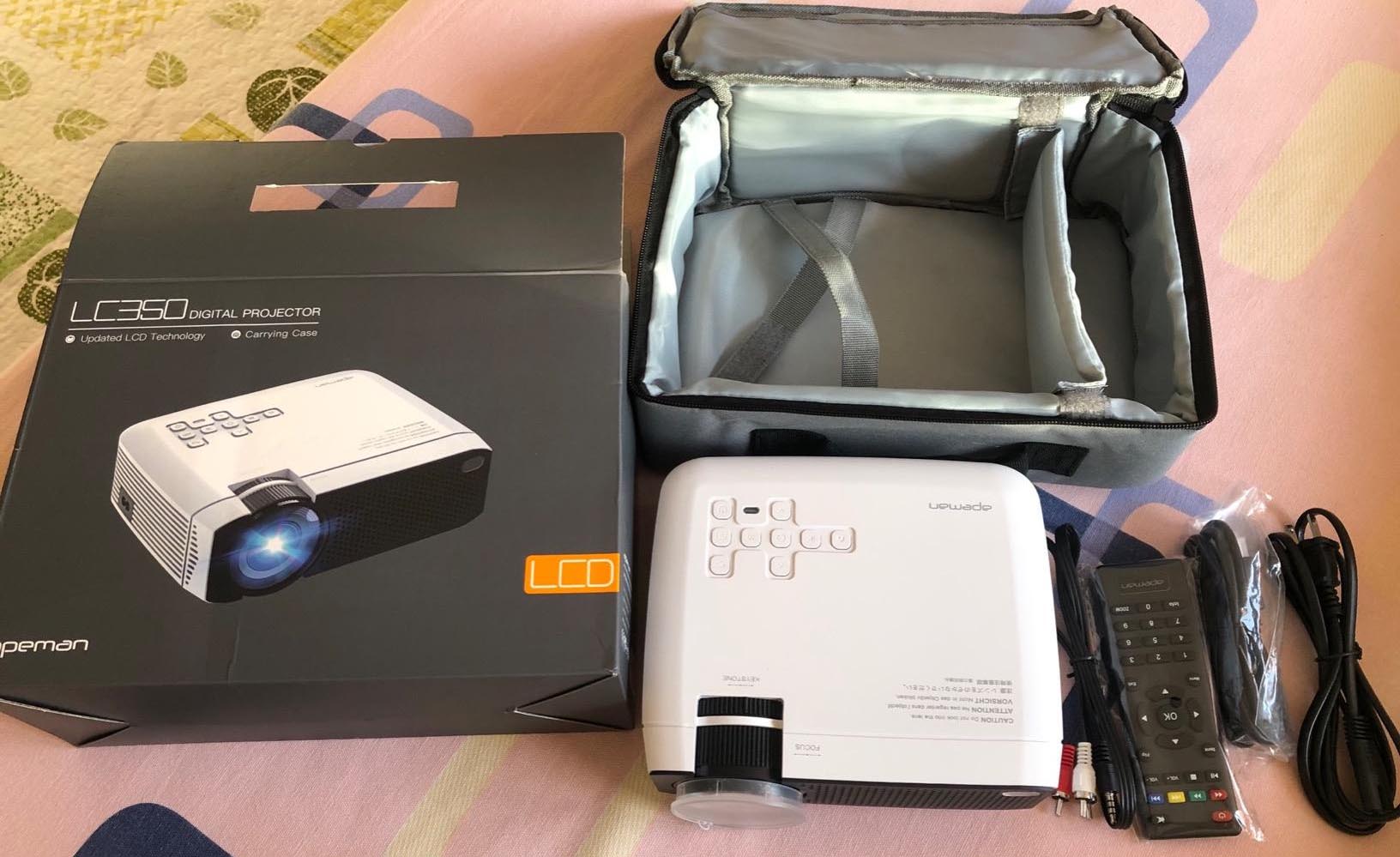 APEMAN is well-known not just for other mini projectors, but also for their full-sized projectors. They even manufacture other video technology, such as underwater cameras. Their APEMAN 4000L Mini Projector is the latest in their mini projector lineup. 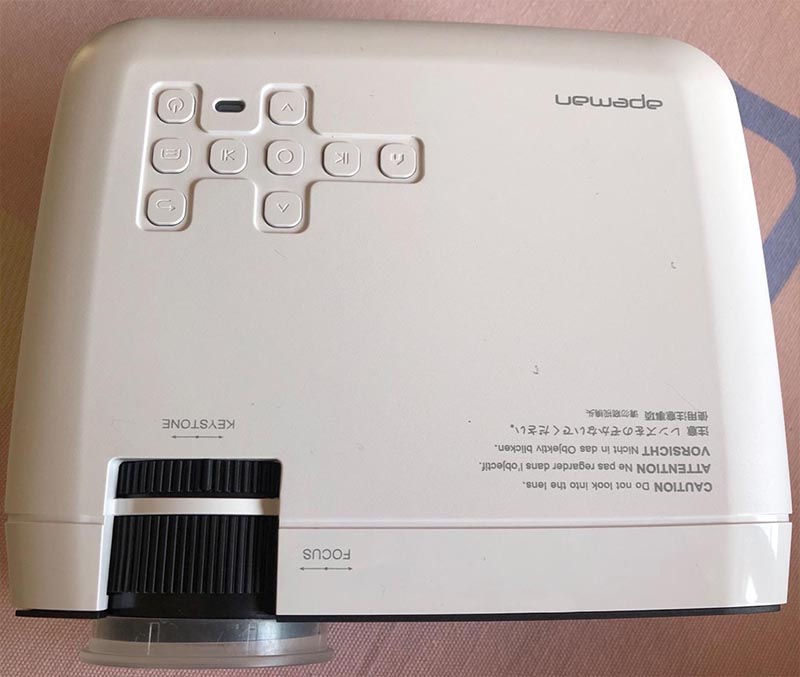 The 4000L is a compact projector, measuring 7.7 inches wide, 6.5 inches deep, and 2.3 inches thick. It’s housed primarily in a glossy white ABS plastic housing, which attracts fingerprints but is easy to clean. The front and the back are constructed from black plastic, and are vented to allow for plenty of air flow. This allows the fan to run quietly, while still keeping the lamp cool enough for safe operation. As with any projector, though, you’ll still want to let the lens housing cool after use before you touch it.

The lamp itself is rated for 45,000 hours. This is slightly less than the industry standard of 50,000 hours, but it still translates to over 10 years of use. By the time you need to replace it, it will be obsolete anyway. On top of the lens, there’s a pair of textured grey wheels, which can be turned to adjust the keystone correction. Both the horizontal and vertical axes can be corrected by 15 degrees, which allows for easy projector placement. 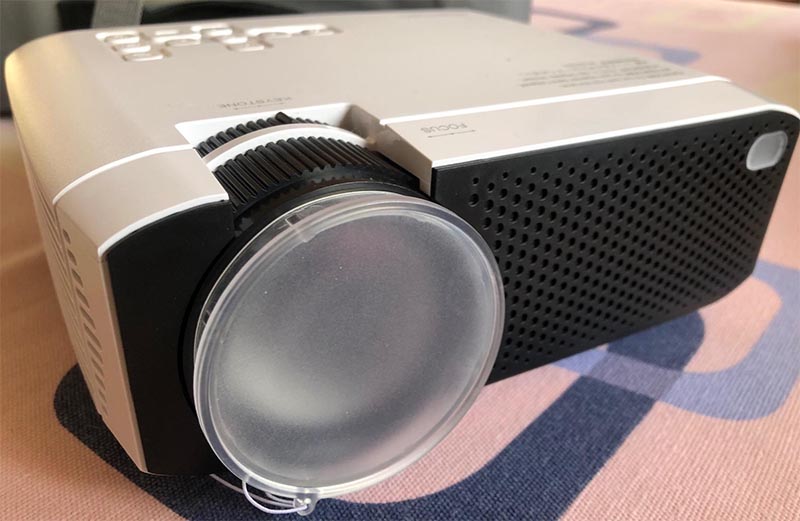 On the bottom of the unit, a small plastic foot allows you to adjust the projection angle. You can adjust it easily by screwing in and out, and the screw stays in place once you’ve set it. All the input ports are located on the right side of the housing, which allows for easy cable management. On top of the housing, you’ll find a full set of controls. You can play, pause, fast forward, and rewind with one touch. By opening the menu, you can perform a variety of other functions. If you like, you can use a remote control instead, which is included in the kit. 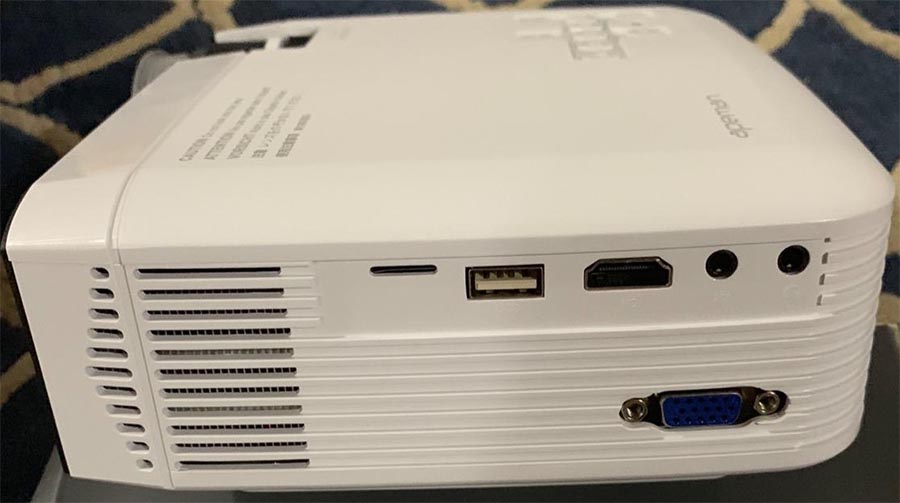 Also included in the kit is a sturdy nylon carrying case. The case isn’t rigid, but it’s well padded enough to avoid damage from everyday bumps and dings. It has enough space for your remote and cables, and it’s a great added value if you travel frequently. All of this includes five years of technical support. That’s not the same as a warranty, but at least APEMAN will help you get everything set up.

The 4000L Mini Projector supports 1080p video, but has a native resolution of 480p. This means that you can use it to display any video source with a resolution of 1080p or less. However, anything that’s higher-resolution than 480p will be downscaled. If you’re watching a movie, this isn’t a big deal. The point of using a projector is to enjoy the experience, not to get the crispest possible picture. On the other hand, this can be problematic in office applications, where your audience might have trouble reading fine text. That said, the bulb shines at 4,000 lumens, which is bright enough to use indoors with the lights on. 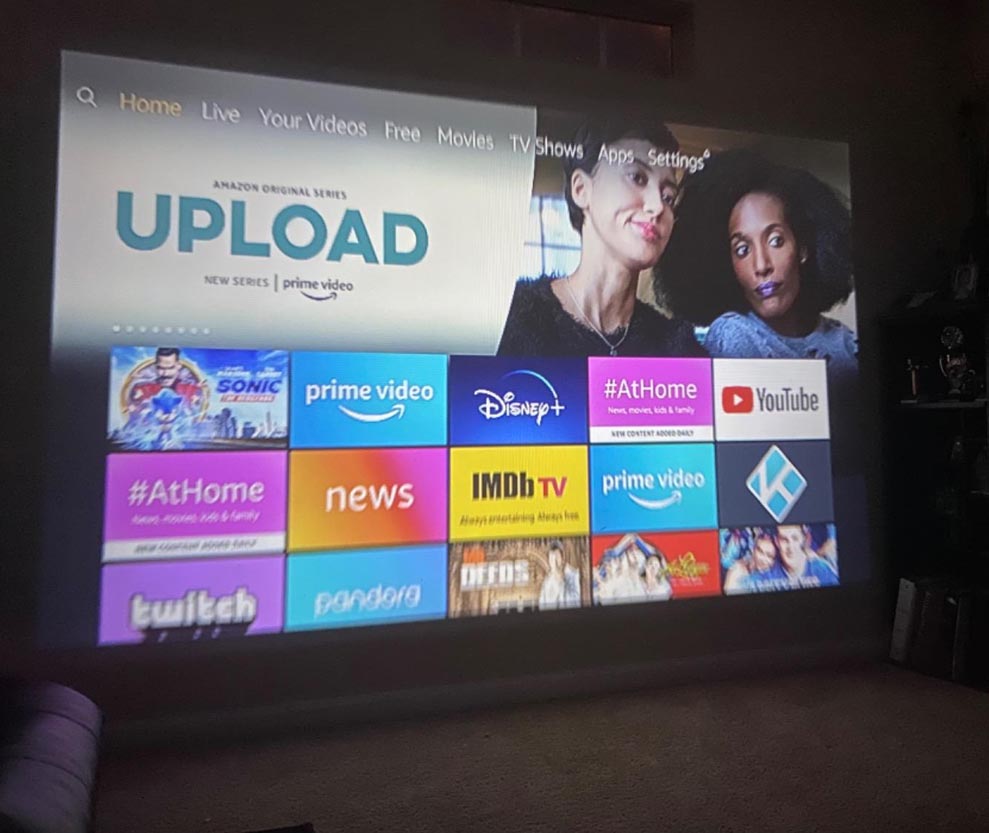 The display ratio is adjustable between 4:3 and 16:9, so you can watch any type of video. The contrast ratio is 2,000:1, which is just about ideal. The contrast ratio measures the difference in brightness between the lightest and darkest parts of the screen. The higher the ratio, the more of a difference you’ll see. This is particularly helpful for seeing more details during dimly-lit scenes. A ratio of 1,000:1 is considered the minimum for a “good” display. Anything more than 3,000:1 is unnecessary; 3,000:1 is approximately the limit of what humans can distinguish in the first place. 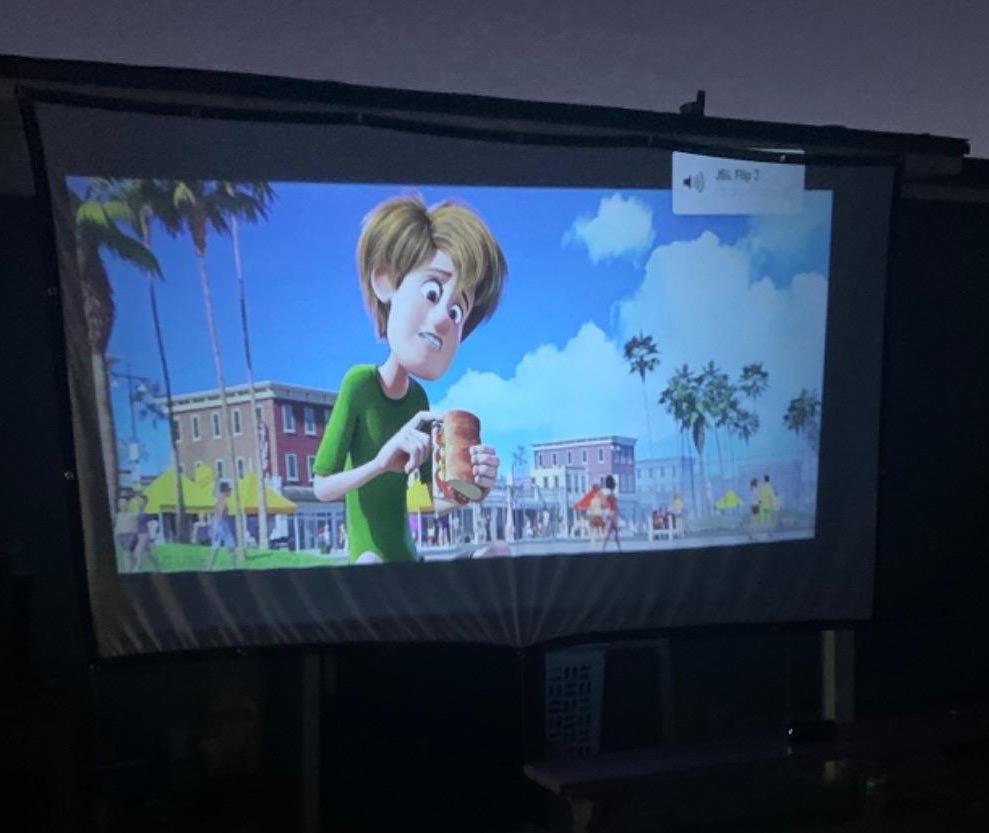 The built-in speakers produce reasonably good audio quality, although they’re fairly low wattage. They’re good enough for watching a movie with a few people, but you’ll want external speakers for louder gatherings. One downside is that they don’t support Dolby sound. If your video source is outputting Dolby sound, you’ll need to switch to regular stereo in your settings.

The 4000L supports most types of devices and video inputs. An HDMI input provides the best quality, but you can also use VGA with an older PC. The 4000L also Micro SD and USB inputs for your digital media. Finally, you can cast to the 4000L with an iOS device, provided your device has a screen casting function. 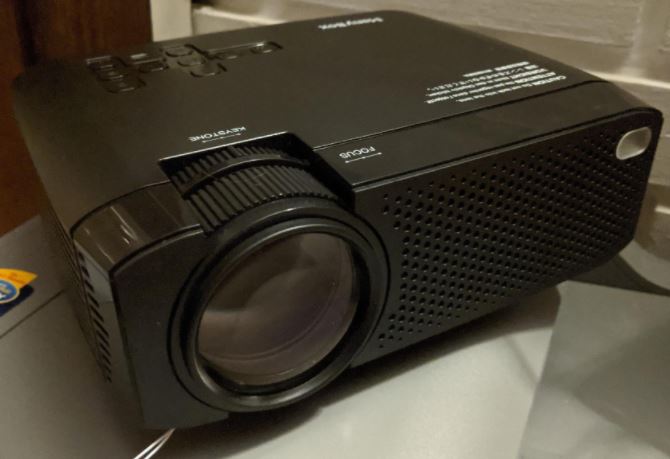 The ManyBox Mini Projector is almost as compact as the APEMAN, at 7.7 inches wide, 6.6 deep, and 3 thick. But instead of an office-friendly white plastic housing, it’s enclosed in a glossy black housing. This will match most home décor, and will be virtually invisible in a dark room while a movie is playing. The outer shell is smooth on all sides, which lends it a sleek, futuristic appearance. However, if you look closely, you’ll see rows of vents down both sides. There are also larger vents in the back, covering almost half of the rear panel. These provide enough airflow for cooling the projector bulb. 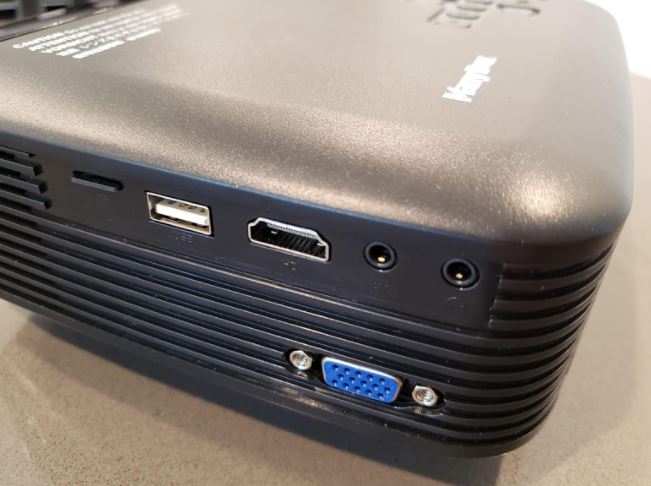 The ManyBox bulb is rated to run for 45,000 hours. This is good enough for more than a decade of use, so durability is a non-issue. Keystone adjustments are easy to make, with a pair of dials located just behind the lens. They adjust the horizontal and vertical axes respectively, and can compensate 15 degrees in either direction. This allows you to position your projector easily, just about anywhere in the room you want to put it. 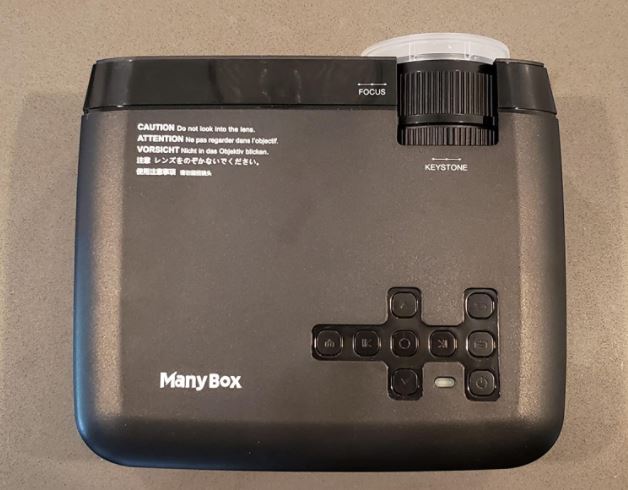 All the controls are located near the back of the housing, although they’re a bit barebones. For most functions, you’ll need to open the projector’s menu. Thankfully, ManyBox includes a remote in the kit, which facilitates easy functions like play, skip, and pause. The kit also includes a nylon carrying case similar to the APEMAN’s case. It’s not exactly tactical, but it’s good enough for air travel and everyday transport. The projector comes covered by a one-year technical support guarantee. As with the APEMAN, this isn’t same as a warranty, but it’s better than nothing. 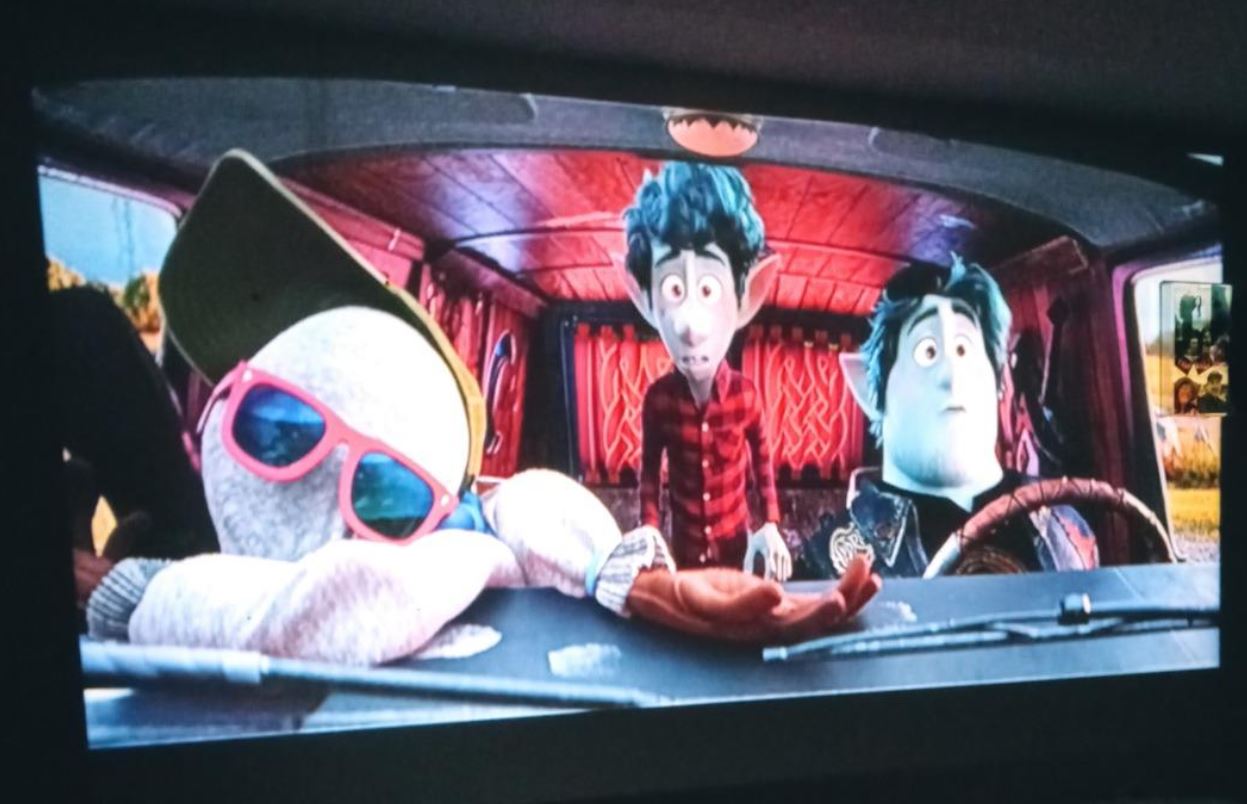 As with the APEMAN projector, the ManyBox Mini Projector will downscale higher-definition videos to 480p. As before, this makes it ill-suited for office applications or gaming. But it’s more than good enough for watching a movie with your family. The maximum display size is rated at 150 inches, which is less than the APEMAN’s 180-inch maximum. That said, you’re looking at a massive display either way. 150 inches is already practically floor-to-ceiling. For a mini projector, that’s huge. 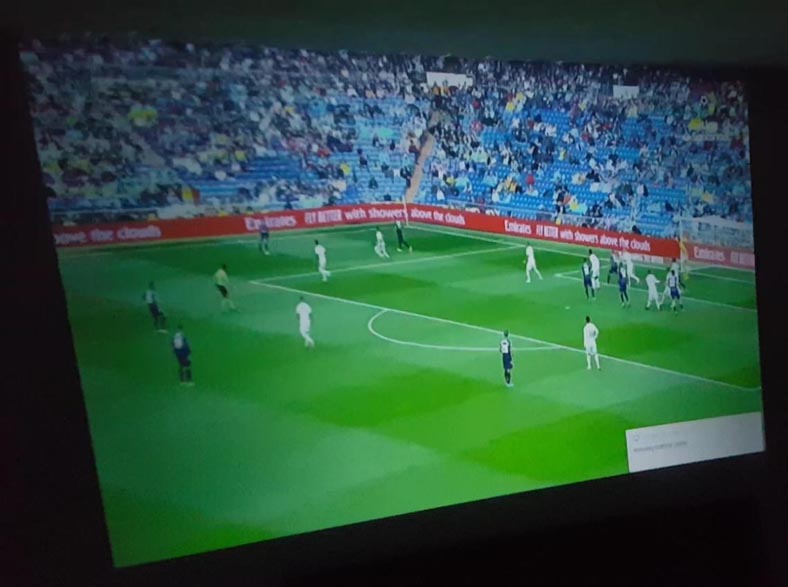 With 1080p input support, the ManyBox Mini Projector will play all your favorite movies. The contrast ratio is 2,000:1, the same as the APEMAN’s. However, the bulb is slightly brighter, at 4,500 lumens. In most circumstances, you’re not going to notice the extra 500 lumens. But if you’re in a borderline situation, it certainly doesn’t hurt. For instance, if you’re not able to eliminate all natural daylight, a few extra lumens goes a long way. 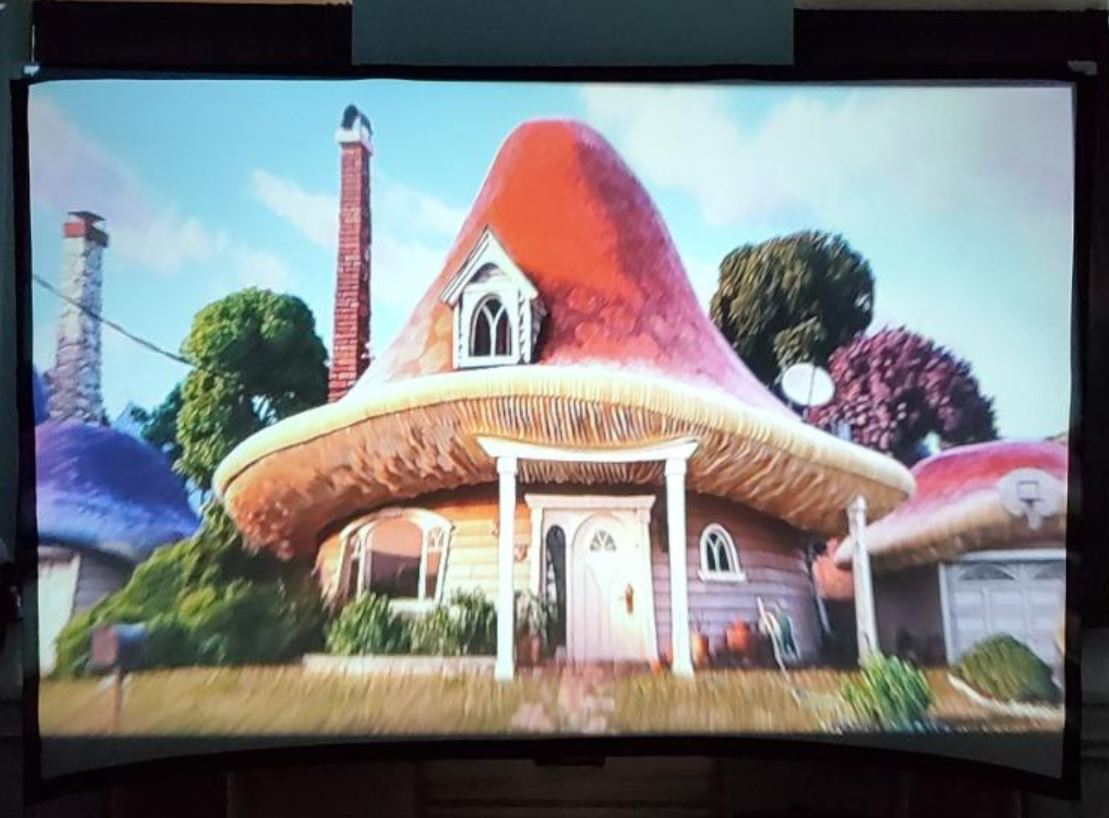 The built-in dual speakers on the ManyBox Mini Projector provide reasonably good sound quality. At the very least, the audio is perfectly clear. But it isn’t loud enough to be heard over a normal conversation. If you need a bit more volume, you’ll need to connect to external speakers or a home stereo system.

The ManyBox Mini Projector is compatible with most of the same devices as the APEMAN 4000L. It supports HDMI, VGA, and USB inputs. On the downside, it doesn’t have an SD card slot. For most people, this won’t be an issue, but it can be a deal-breaker for photography enthusiasts.

For most practical purposes, the APEMAN 4000L Mini Projector and the ManyBox Mini Projector are more or less identical. That said, there are a few features that set them apart, and that’s worth keeping in mind.

In terms of physical construction, the APEMAN is a bit better. For one thing, the side inputs are easier to access than rear inputs. For another thing, the angle adjustment screw on the base is a nice touch. To be fair, this is a small touch. But when you’re basically comparing apples to apples, it’s the small touches that make the difference. Finally, the APEMAN 4000L features a Micro SD slot, which the ManyBox projector lacks.

The ManyBox Mini Projector, on the other hand, has a slightly brighter bulb. It also has a sleeker design, with a gloss black finish enclosing the entire unit. For brightly-lit rooms or the style-conscious, it’s a solid choice.