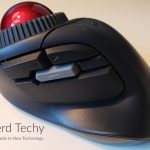 If you’re in the market for a new mouse, there are probably no more options than you know what to do with. How do you separate one wireless mouse from another? One thing to look for is the quality of construction. Is it durable or cheap? Will it last you for a long time? Another thing to look for is accuracy. In other words, does the mouse move slowly or quickly when it’s operated? You could look for a lot of customizable buttons, or a design that’s made for big hands.

One other factor to look at is how the mouse itself works. Do you want a normal optical mouse? A handheld mouse? At trackball mouse? Each has its own benefits and drawbacks that are important to keep in mind. No matter what you choose, it’s a good idea to stick with brands that are well-respected. With so many good mouse manufacturers out there, it’s not worth taking any chances. Kensington is a brand with a long track record for making everything from mice to docking stations.

We’re about to look at the Kensington Orbit Fusion, a trackball mouse that’s designed primarily for office use. As a trackball mouse, it has several notable advantages that we’ll look into in a second. But just because it has a useful design doesn’t necessarily mean it performs well. We wanted to see how well it actually performs, from precision to extra features. Once we’ve done all that, we’ll have a much better idea of what we’re looking at. Now let’s get started, so we can render our final verdict! 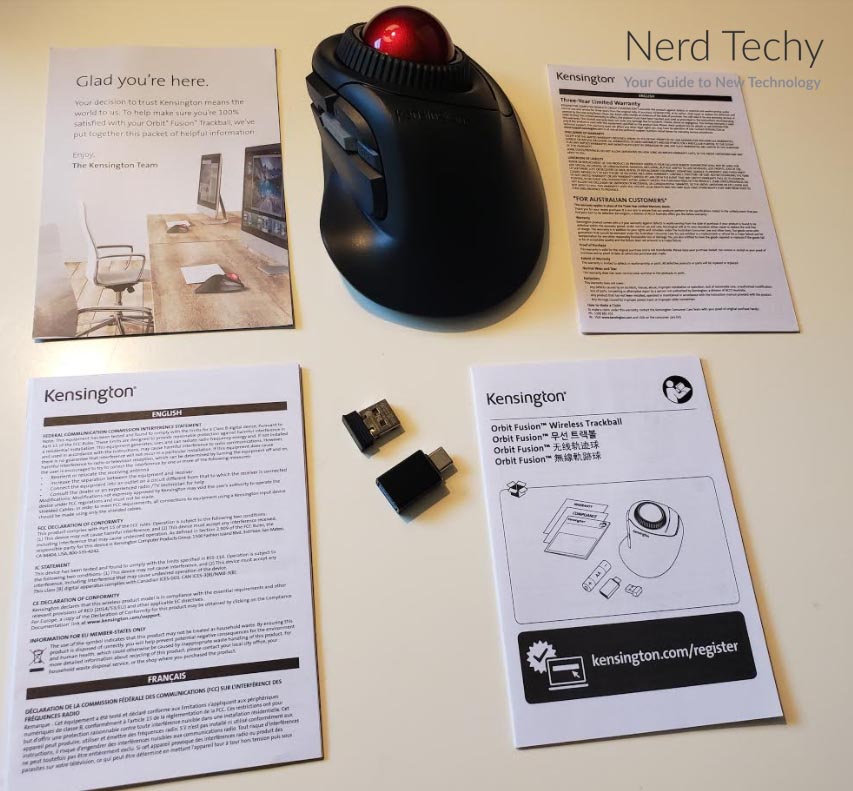 Why Use a Trackball Mouse?

So, what is it about a trackball mouse that makes it different from an ordinary mouse? A trackball mouse is designed backwards from an ordinary mouse. Instead of moving the mouse around on your desk, you roll your thumb or fingers across a ball on the top. The main advantage here is ergonomics. This is particularly noticeable if you suffer from carpal tunnel or other chronic pain. By reducing the amount of movement you need to make, a trackball mouse can be a lifesaver. Not only that, but the stationary nature of the mouse gives designers more flexibility in terms of shape. This allows for a more ergonomic design in general.

Nowadays, most mice use a laser sensor, located on the bottom of the mouse. As the sensor is moved around, the laser will reflect back at the mouse in a slightly different pattern. This will register with the sensor, which will tell your computer how to move the mouse cursor. If this sounds a bit complex, it is. Earlier mice used a simple roller ball with a set of mechanical sensors. As the ball rolled around your desk, it moved the cursor. This design might have been simpler, but it tended to collect dust, which meant your mouse required frequent cleaning.

The disadvantage of a laser mouse is that it limits you to a traditional design. You can’t have a laser pointing up at your face to move your thumb around on it. As a result, if you want a more ergonomic design, you still need to use a trackball. This means you’ll have to do some occasional cleaning to keep your trackball clean. Another downside of a trackball mouse is that they’re not ideal for gaming. They’re generally designed for office use. It’s not they can’t be as precise as a gaming mouse; some trackball mice are extremely precise. It’s just that it’s harder for the user to be as precise with the quick, snappy movements required for gaming. In addition, trackball mice can be a bit pricier than other mice.

The other main advantage of trackball mice is that they require less desk space. Even a very small optical mouse requires a good bit of space to move around. A trackball mouse, on the other hand, is stationary. Even a very large trackball mouse doesn’t need a whole lot of space overall. Trackball mice can also work on any surface. You can even use them in bed, or on a glass table. Finally, because trackball mice are free to be a bit larger than ordinary mice, they have room for more buttons. This makes it easy to customize them for a variety of different tasks. 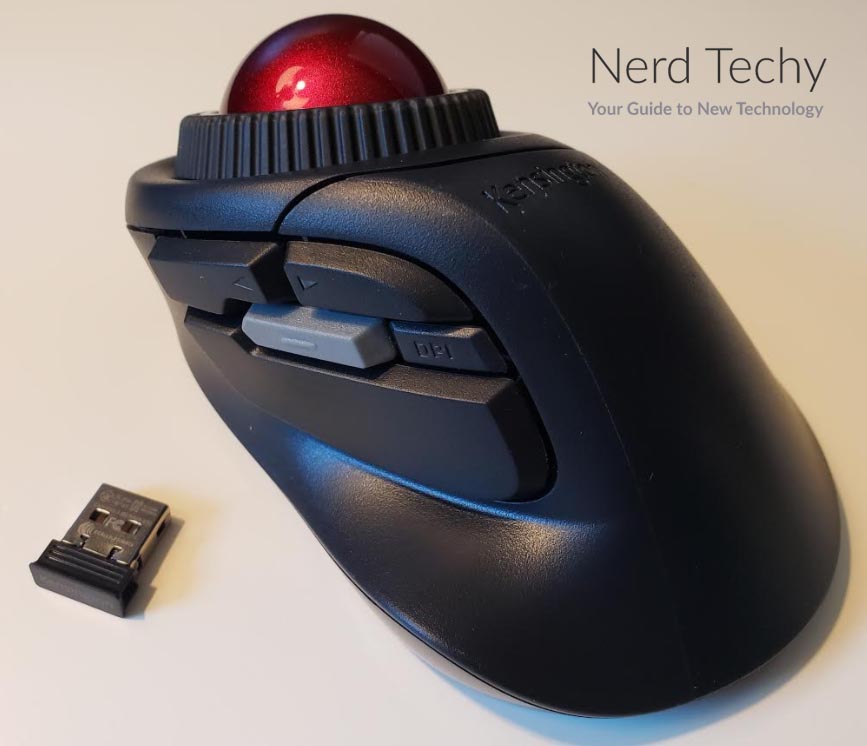 The first thing you’ll notice about the Kensington Fusion Orbit is the broad profile and generously-sized trackball. Both of these design features serve to make the Fusion Orbit suitable for just about any hand size. Because the trackball is so large, it can be easily operated from any angle. It doesn’t matter how close your index finger is to the left side of the mouse. Yes, this mouse is operated with your index finger, not with your thumb like some trackball mice. 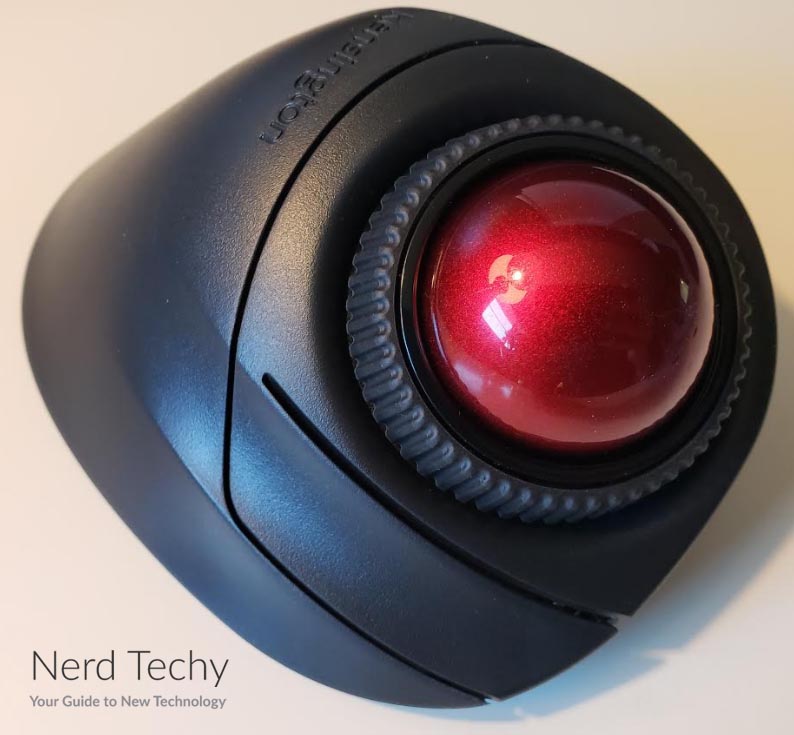 Given this design choice, you might reasonably ask where the mouse buttons go. They’re located by your thumb and ring finger respectively. Near your thumb, there are also a handful of other controls. These include two customizable buttons, and a three-way DPI toggle. We’ll dig more into the specifics in a little bit. Another interesting design feature is the rotating scroll ring. Instead of a thumb-operated wheel, there’s a ring around the trackball itself. This is easy to use with either your ring, middle, or index finger depending on your preference. The ring can also be clicked, much like a standard scroll wheel. 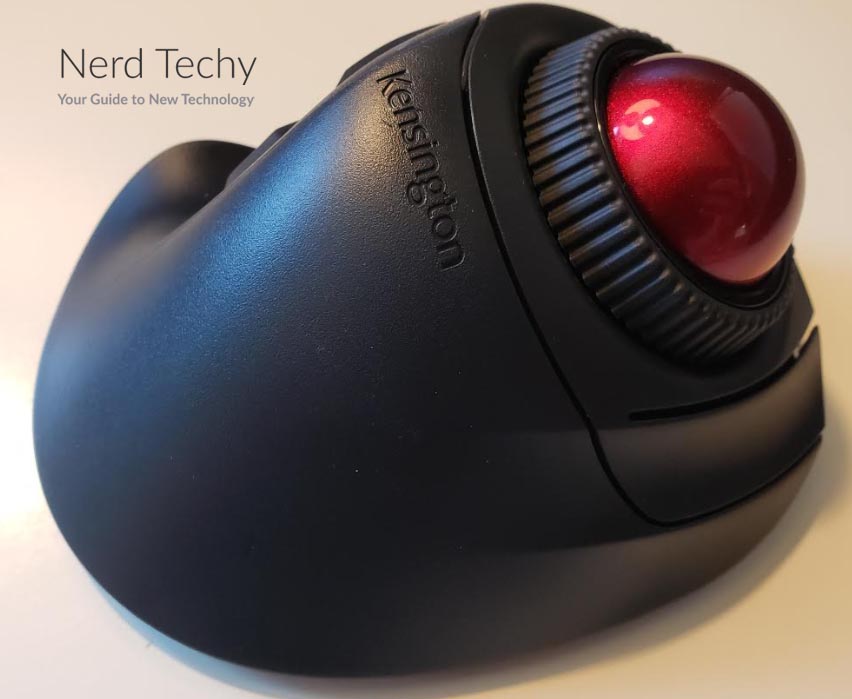 Ultimately, ergonomics and design are mostly a matter of preference. Not every type of grip is going to be right for everybody. If you prefer a more angled grip, consider the Kensington Pro Fit Ergo. It has a unique angled design, but it can feel a bit bulky if you’ve got small hands.
The mouse housing is constructed from a satin ABS plastic that’s easy to clean and won’t get sticky with sweat. The entire housing is black, even the small Kensington logo on the top, which is merely embossed into the surface. The only splash of color is the trackball, which is a bright, glossy red. The finish is totally smooth, without any variation whatsoever. This red on black combination is professional in appearance, and suitable both for home and office use. 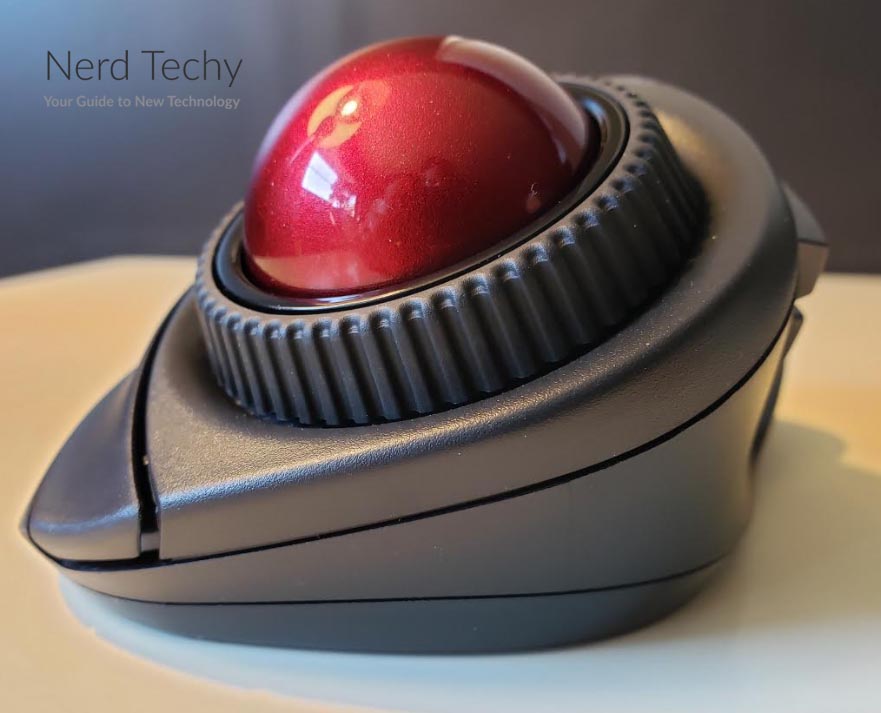 The trackball measures 40mm in diameter, or a little over an inch and a half. This makes it fairly large, much more so than many trackballs. Underneath, a precision laser tracks the movement of the ball. There’s also an ejector plunger inside. If you turn the Orbit Fusion over, you’ll see a small metal tab. Press that tab, and the trackball will eject. This makes it easy to remove when it inevitably requires cleaning. In addition, the bottom of the housing also has a battery compartment, and a storage slot for the wireless receiver.

As we alluded to earlier, how sensitive the Kensington Orbit Fusion is depends on your DPI settings. There are three different sensitivity settings: 400 DPI, 800 DPI, and 1,500 DPI. The different DPI settings refer to how much the cursor will move for any given mouse movement. The higher the DPI, the more the cursor will move. As a result, higher DPI settings are generally faster, but not necessarily more efficient. They’re best for tasks where you care more about speed than precision. On the other hand, if you’re doing something like photo editing that requires precision, a lower DPI setting is better. 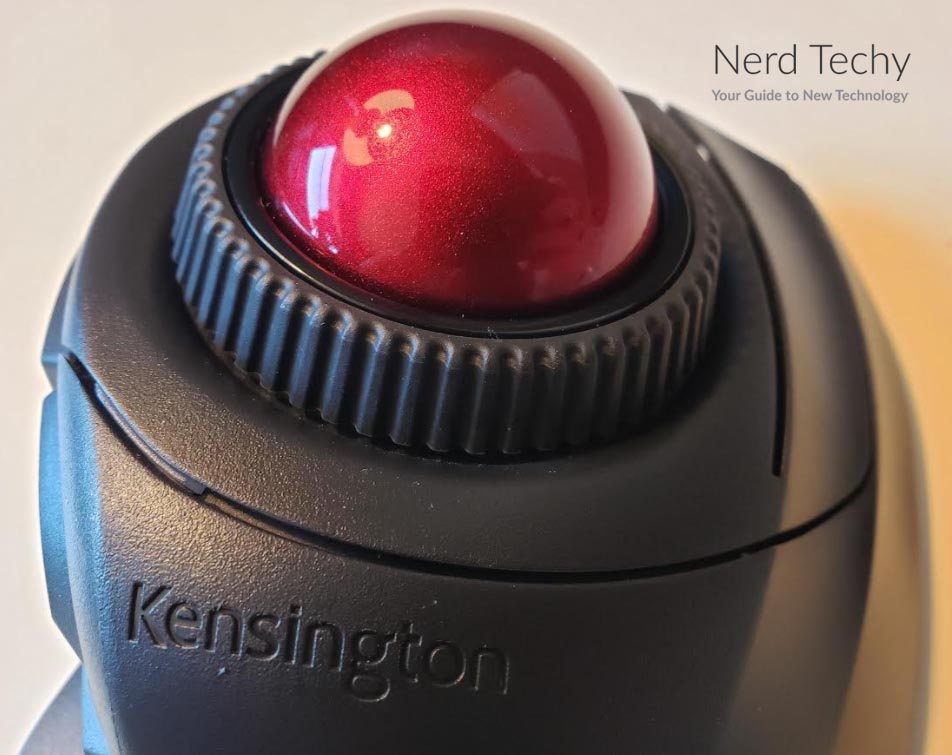 The Kensington Orbit Fusion is plug and play on both Windows and Mac OS machines. You don’t have to install any third-party software. Simply insert the tiny nano receiver into your USB port, and the mouse will start working in seconds. It connects via a 2.4GHz signal, which has plenty of range for any practical purposes. So even if your computer is on the other side of the room, you can still use your mouse. When you want to travel with the Orbit Fusion, the receiver stows neatly in the back. 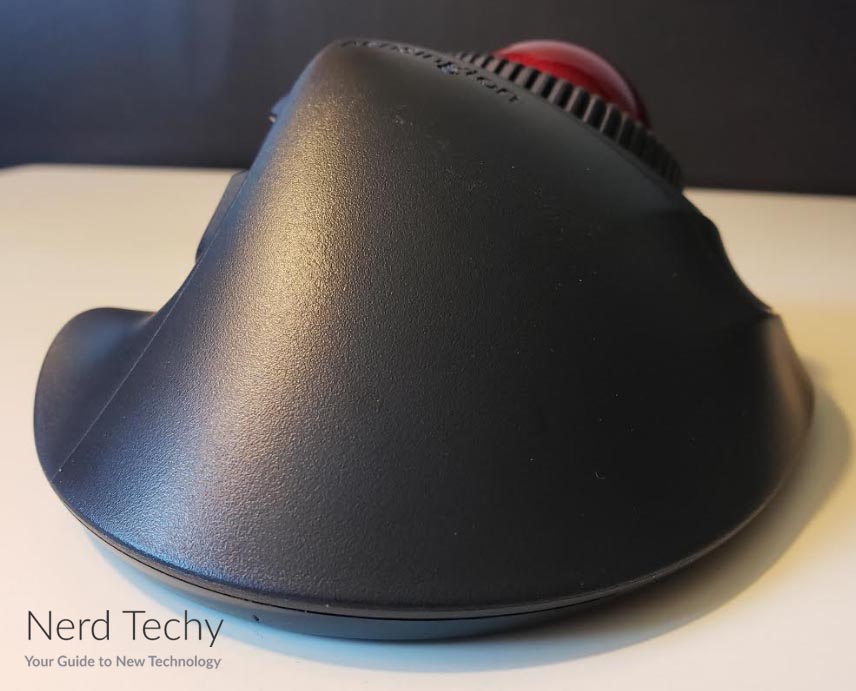 With that being said, Kensington does offer free companion software called KensingtonWorks. Within the software, you can customize all of the mouse buttons. For most people, you’ll want to leave the main buttons as they are. However, the ring and two extra buttons can sometimes be more useful if they’re customized. By default, the ring will act as a center click, while the forward and back buttons will act as browser controls. 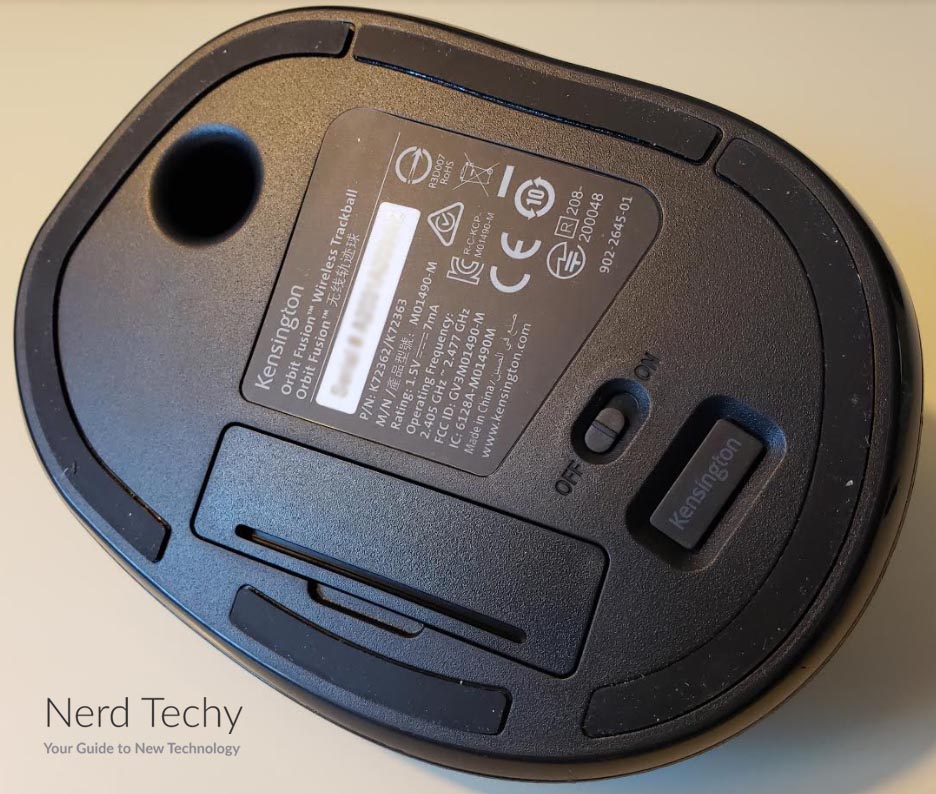 The Orbit Fusion will operate for as long as 14 months on a single AA battery. Keep in mind that this is a manufacturer’s rating, and it basically assumes the mouse is idle. But even under very heavy use, you can expect the battery to last for a minimum of six months. No matter how you cut it, you’re not going to have to change the battery very often. There’s even a battery included in the box, so you’re all ready to get started. 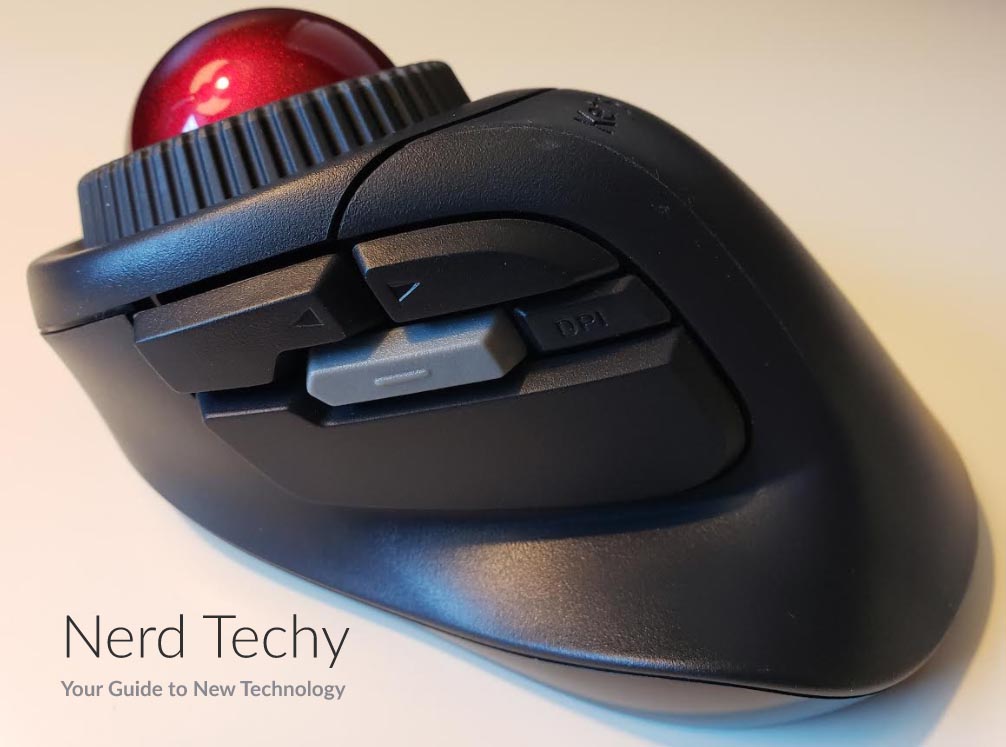 As you can see, the Kensington Orbit Fusion has a lot to recommend it. The ergonomics, to some extent, are a matter of preference. But for most people, it should be very comfortable to operate. Not only that, but the design is quite innovative. We particularly liked the control ring. It was a nice alternative to often-clumsy thumb scroll wheels. We also liked the trackball itself. The large size appears intimidating at first, but it’s actually easier to operate than a smaller trackball.

To be fair, the Orbit Fusion is a bit pricey. It’s also not suitable for gaming, although this isn’t the point of a trackball mouse to begin with. For what it’s supposed to be, it performs quite well. It’s also versatile. The customizable buttons and KensingtonWorks software make the Orbit Fusion suitable for almost any task. Not only that, but you can adjust the DPI on the fly. Content creators in particular will appreciate this, since it’s a feature rarely found outside of gaming mice.