If you’ve been a reader here at NerdTechy for the past few months, you’ve probably heard of Tronsmart. They’re an up and coming manufacturer of some of the most affordable and top-rated audio products on the market. From their popular Spunky Pro Earbuds we reviewed back in August, to their 20W Bluetooth speaker, the Element T2 Plus that we tested in October, it’s clear that they’re making a name for themselves. Simply put, they’ve always found their balance in terms of quality and affordability.

Just last week we heard about their newest release – the Spunky Beat True Wireless Earbuds. At that time, we knew we had to get our hands on them and test them out. Designed with improvements in sound quality, they appear to offer a lot and still maintain an inexpensive price-point. Today we received our pair in the mail and we’re here to properly use and review them in great detail. Let’s get right into it…

Opening the box for the first time it was obvious to us that the Spunky Beat were minimalist in design. They’re much smaller than most in-ear earbuds (which is a good thing). The slimmed down nature of them makes them stand-out among others and appear sleek and original. 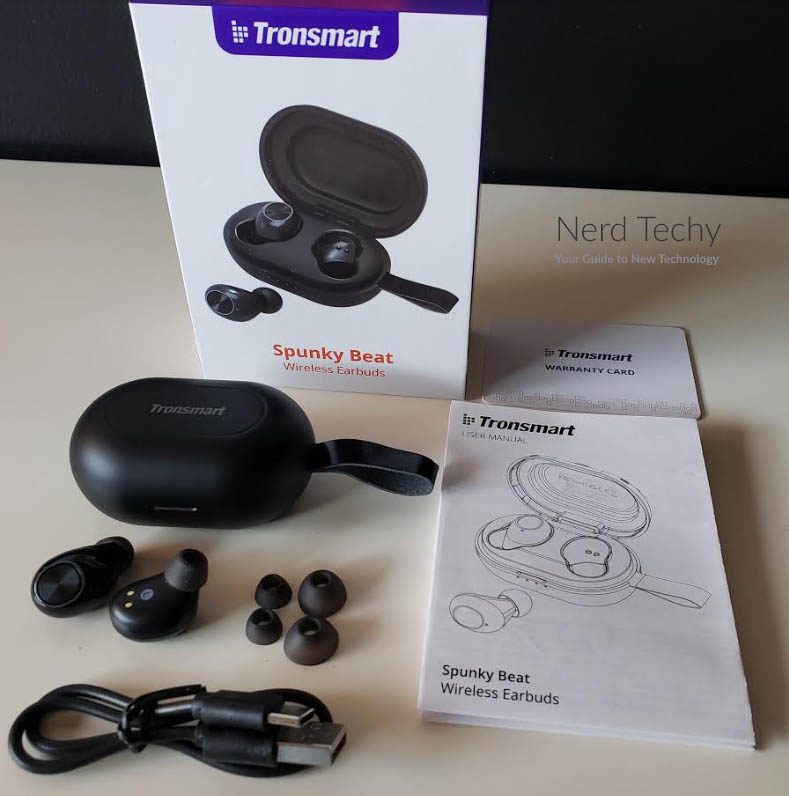 Included in the box is of course the earbuds themselves, a charging case, USB-A to USB-C charging cable, instruction manual, warranty card and two extra sets of ear tips. This is everything you need and nothing more.

When we first place the Tronsmart Spunky Beat earbuds in our ears, we were quite pleased with the way they fit. As we mentioned, they’re very small. In fact, they’re a bit smaller than a modern penny in width and about half the size when it comes to width. Unlike some earbuds in this same price-range, they’re much more compact and sleek. So much so that they don’t stick out or become an obvious eyesore. Nestled into our ear canal, the Spunky Beat didn’t wiggle or come loose – even with vigorous shaking of the head. 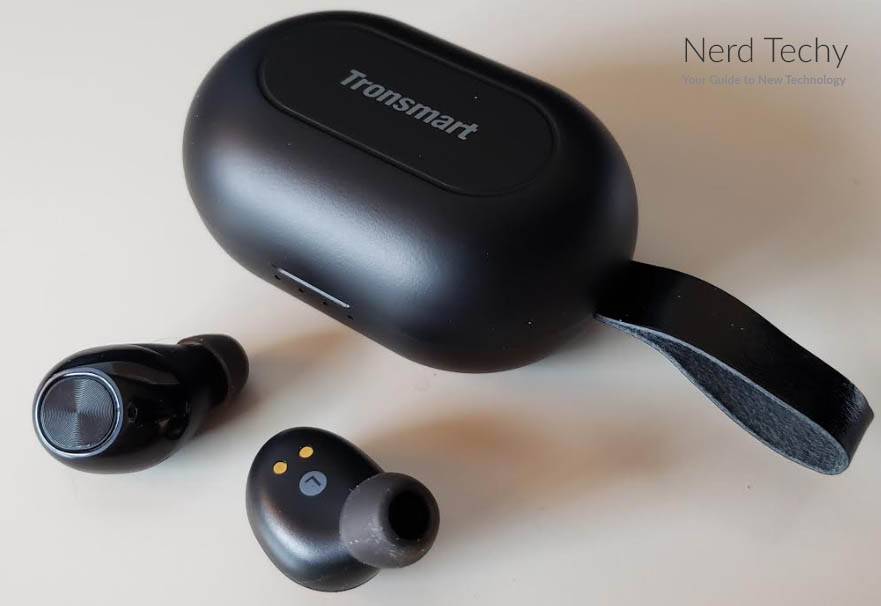 This was the case for us, but may not initially be the same for you. Why is this? You see, they come ready to wear with the medium sized ear tips, which tend to fit most individuals. However, you have the option of down-sizing or up-sizing the fit with the included 2 extra sets of ear tips. We highly recommend achieving a proper, wiggle-free fit before you try to enjoy them to their fullest. Needless to say, take a minute and swap out the tips to make certain that you’re utilizing the right ones. Moreover, check that you’re wearing the right one in the right ear. There’s a small “R” and “L” on each respected earbud, indicating which is for the right and left ear. 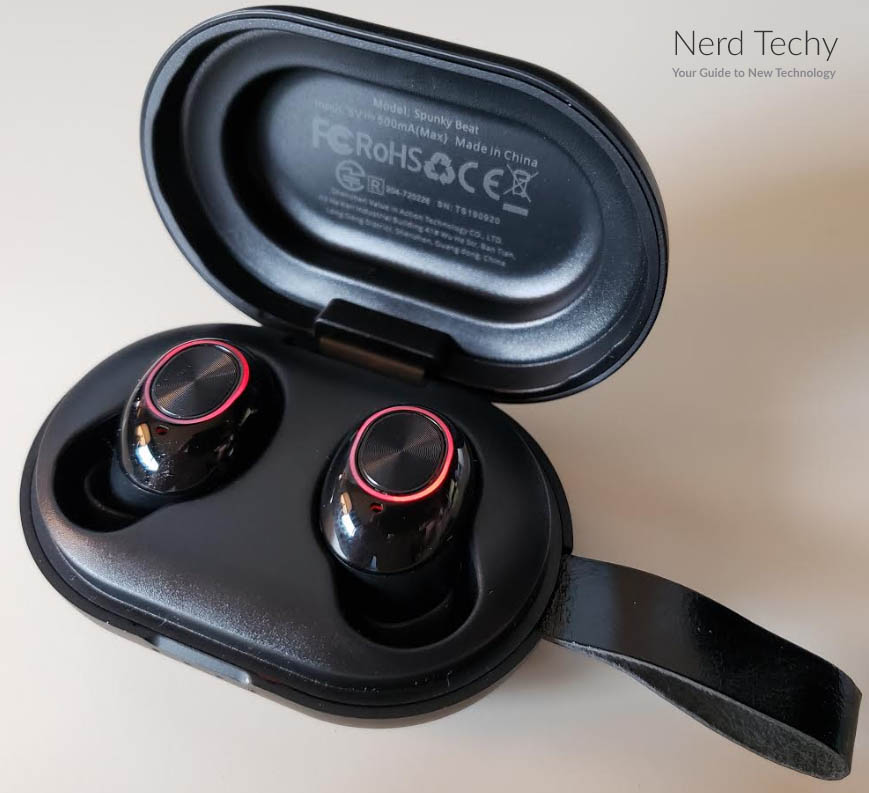 Once you feel like you’ve figured out the fit of them, it’s time to pair them up for first-time use. But even before you do that, it’s a good idea to fully charge them up. Place them in the charging case and plug it in for 1-2 hours. Afterwards, you’ll be ready to pair them up and get to enjoying them. 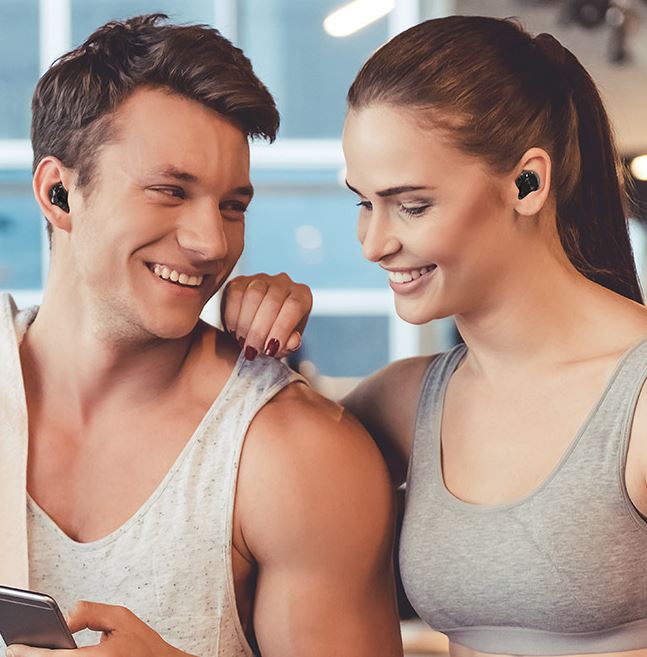 The pairing process is easy. Simply take the earbuds out of the case and they’ll automatically enter TWS pairing mode and each one will blink between red/blue indeterminately. Next, move on over to your smartphone, tablet or other Bluetooth-capable device and go into the Bluetooth settings. Scroll down the list and look for “Tronsmart Spunky Beat”. Keep them close by and select them within your settings. At that time, the LEDs will stop blinking, indicating a successful pair.

This isn’t something you’ll need to accomplish each time you want to use them. After pairing them for the first time, you’ll just need to remove them from the case and they’ll automatically pair to your device. Furthermore, if you’d like to use just one earbud at a time, simply remove one from the case instead of both. The removed earbud will go into “mono mode” and become the only paired earbud while the other stays securely within the case. 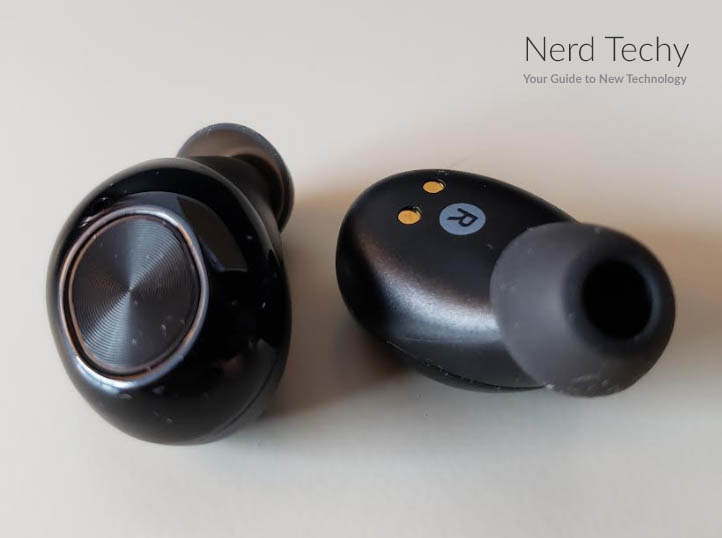 Now that we had them paired and ready to go, it was time to start using them. We opened up our Spotify playlist and immediately began enjoying them. Right from the start, it was apparent that Tronsmart designed the Spunky Beat with better acoustics in mind. Utilizing the newest Qualcomm QCC3020 chip, we were absolutely pleased with how they sounded. The tones seemed much more accurate than the Flybuds as the music seemed to carry-on an in-depth representation of the music being played. Vocals were clear and the treble seemed to release the perfect balance of highs, mids and lows. Acoustic sounds were our favorite and vocals seemed much more realistic than we would have ever imagined.

Being that the Spunky Beat’s are equipped with aptX CVC 8.0 noise cancellation, it was easy to get deep into the music without noticing much else going on. That’s what we love in a quality set of earbuds – the ability to delve deep into your tunes and forget about the distractions right around you. These seemed to offer exactly that. They did a fantastic job at keeping out unwanted background noise so that the music was all you’re interested in. 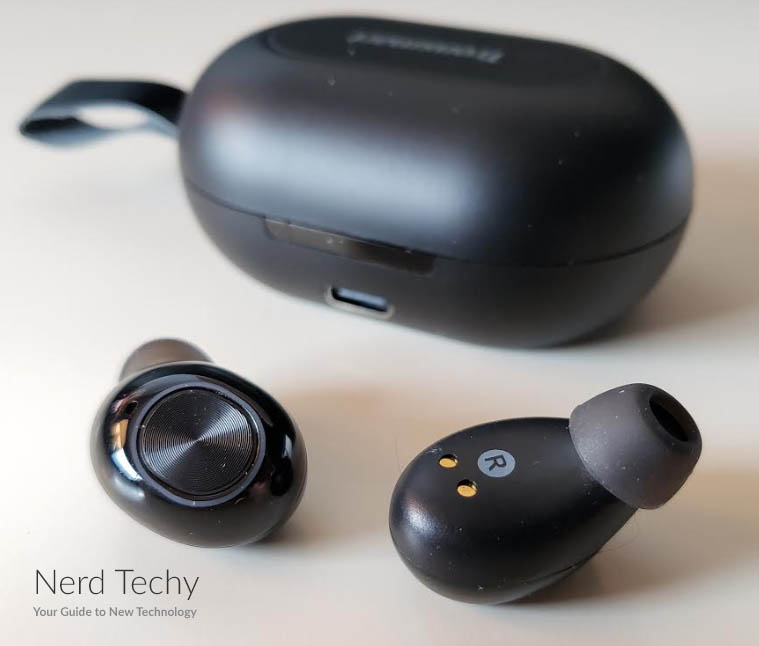 While the lows were apparent, they weren’t as deep and rumble-infused as we initially hoped for. They didn’t seem built for deep bass but they did offer an acceptable amount that wasn’t obviously distorted unless you cranked them up all the way. If you kept the volume to an acceptable level, it seemed that the bass was just decent.

Truth be told, most earbuds fall short when it comes to low tones, so we weren’t too surprised by this. After all, these aren’t studio-grade headphones, they’re ideal for active lifestyles or on-the-go use. 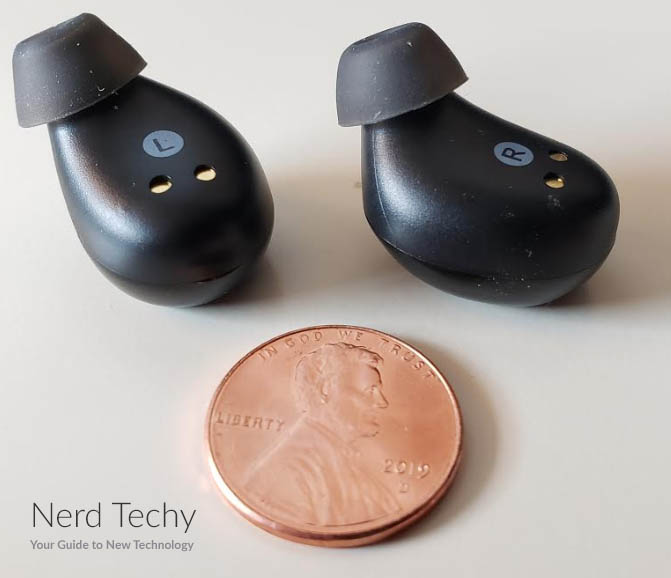 The inclusion of a charging case is nice to have. It not only keeps the internal battery on each earbud fully charged up while not in use, but gives you a safe and protected place to store them. Each time you’re finished using the Spunky Beat’s, simply place them in their cradle and you’re good to go on battery-life next time you’d like to use them. On the backside of the charging case is a small USB-C input where you can connect the included charging cable. Flip over the case and you’ll notice another cable that’s secured to the base. It’s a USB-A charging cable that’s built directly into the case itself. That way, you don’t have to carry-along a cable when you want to top them off. Having the option of using 2 different cables keeps versatility at an all time high. 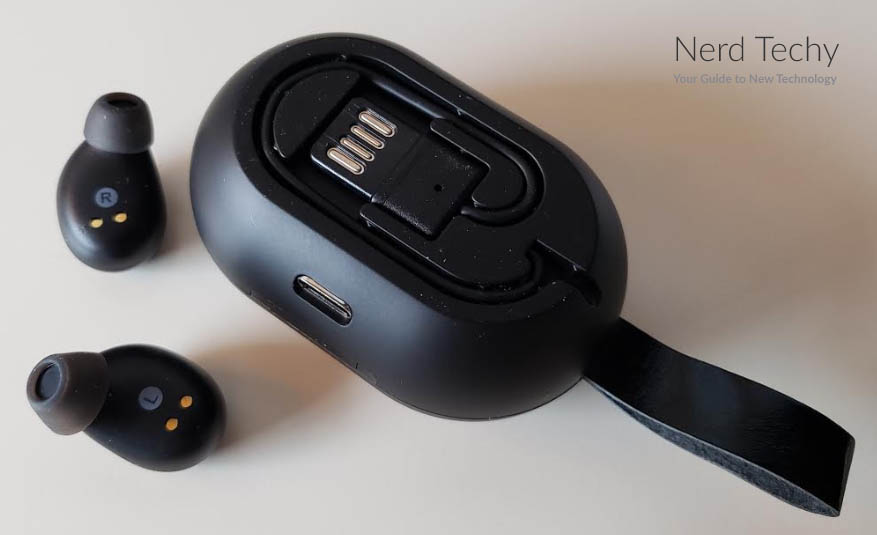 Tronsmart estimates the Spunky Beat’s have an estimated battery life of 7 hours per full charge. That is, both earbuds should last 7 hours between full charging cycles. Additionally, they claim that the case provides 2 and a half full charge cycles before it needs to be plugged-in. We wanted to see if these estimates were accurate… 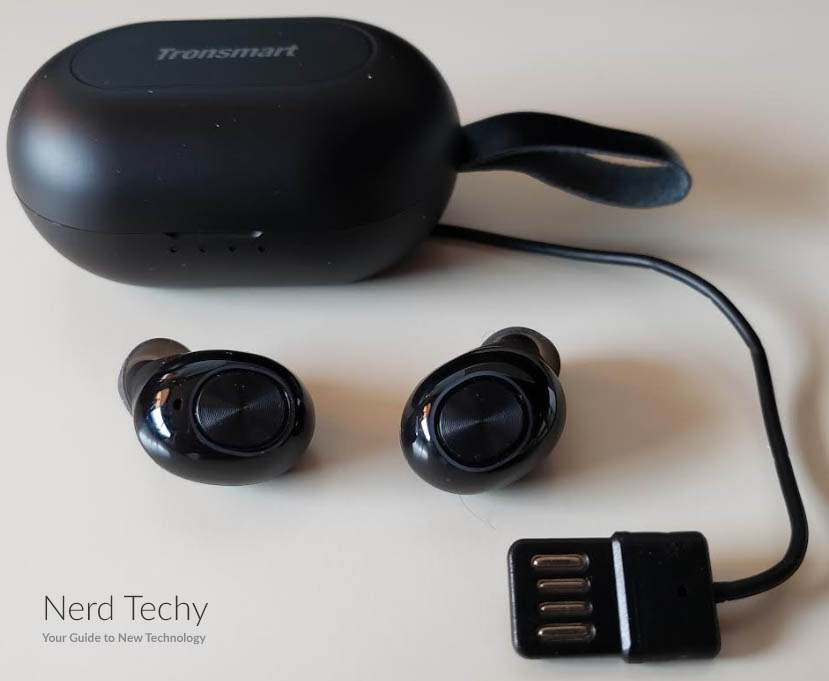 With this, it’s clear that Tronsmart’s estimate of 2.5 charges at 7 hours each (at 50% volume) was decently accurate. While certain environmental factors and variables do exist, we felt like the battery life wasn’t far-fetched at all and ended up being quite promising to their original estimates. While the Spunky Beat’s aren’t the longest-lasting earbuds available, they provide plenty of use for most realistic situations. 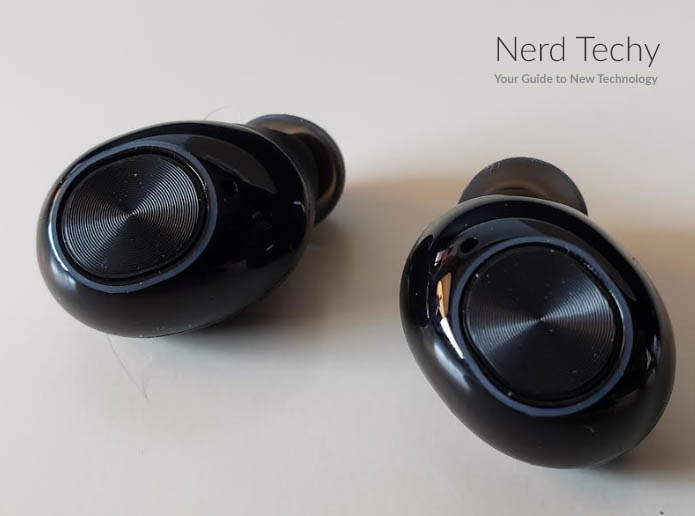 Tronsmart included an internal microphone with the Spunky Beat’s. While most people probably won’t ever utilize it, we thought it was a nice addition. Making phone calls or utilizing voice activation to Siri or Google Assistant works quite well. In our testing, we never encountered a problem when making phone calls or activating Siri when they were paired to our iPhone. Whoever we were calling at the time couldn’t even tell that we were speaking through earbuds. It goes to show that there’s no loss in audio quality and voice commands always worked well.

As we stated before, the Tronsmart Spunky Beat are ideal for active lifestyles. Since they’re geared for working out, they’ve included IPX5 waterproofing into the design. This is a durability standard that proves they’re able to withstand moisture and sweat for long periods. Taking a jog or bringing them to the gym provides no concerns since they’re made to handle a bit of a beating. 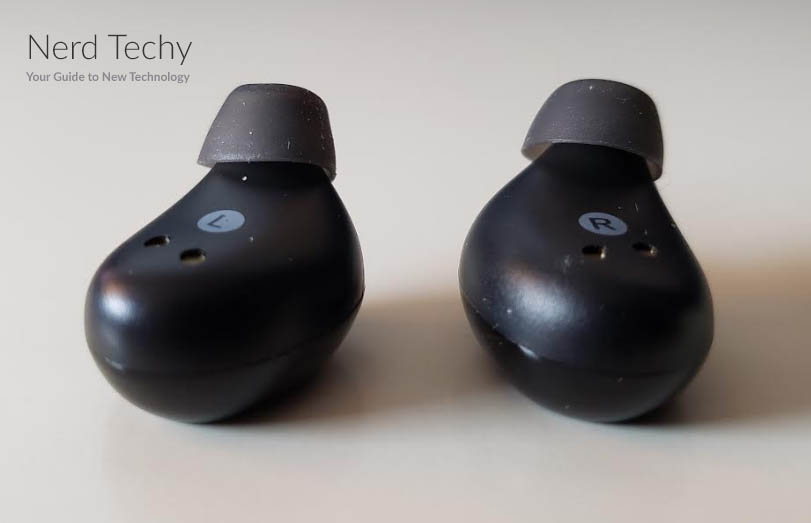 They’re not meant for full water submersion (so no swimming), but they’re perfect for an activity that you might become sweaty. We brought them to the gym on several occassions and never had any complaints about them falling out or becoming problematic. Even with lots of sweat dripping down or heads, it never loosened them up and made them want to fall out. They held in nicely and still provided great sounding tunes for our entire workout regime.

Feeling them in your hands, they might seem a bit fragile. We’d say they’re prone to being lost since they’re so small, but as long as you keep them stored within the charging case, you likely won’t have trouble keeping track of them. Just make sure to keep the charging case nearby, so you have a place to keep them if you need to take them out for a few minutes.

Tronsmart seems to have done it again. They’ve designed the Spunky Beat True Wireless Earbuds in a way that keeps them streamlined and useful for everyday listening. Catered to the active individual, they excel when it comes to comfort and fit. The small design bodes well with most listeners as they don’t look too big and bulky when you’re using them. 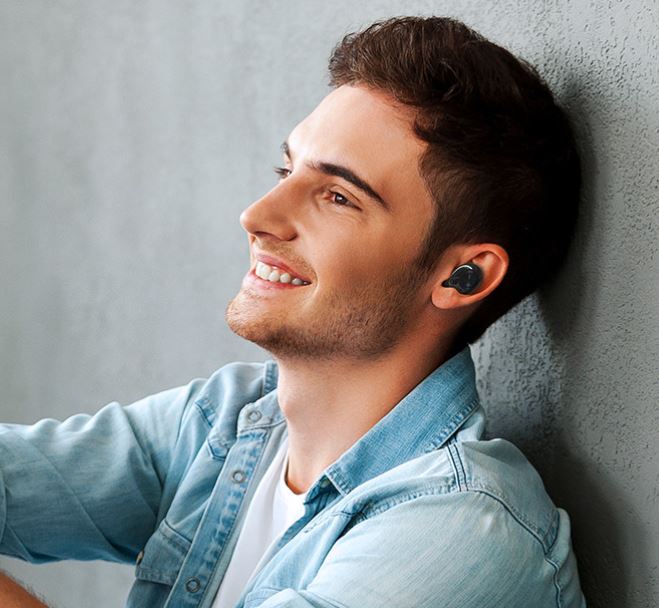 Audio quality is on-point, although the bass is slightly lacking. We truly enjoyed the acoustics and proper balanced of mids and highs that kept our tunes sounding exactly how we desired. Country, pop, R&B, rock and classical all sounded fantastic. When it came to deep beats with dubstep, we were wishing they had a stronger bass. But these are earbuds. They’re not over-ear headphones like the Mpow H17.

Overall, we’re very pleased with the Spunky Beats. They’re crafted from head to toe with attractive features and an even-more attractive design. Needless to say, we wouldn’t hesitate to give them our recommendation for anyone looking for the right balance of affordability and quality.