The PlayStation 4 is one of the most popular consoles of all time. In fact, it currently ranks at number four, and will likely hit number three before production ends. There are numerous reasons for the PS4’s success. For one thing, when it released in 2013, the Nintendo Wii was four years old. And the competing Xbox One required you to use the Kinect motion sensor upon release. This approach was unpopular to say the least. We can add to this the PS4’s solid performance and its generous helping of exclusive titles. All of those factors combined to make the PS4 what it is today.

The PS5 was just released in November, and many gamers are flocking to the newer console. But there are a few reasons to hang onto your PS4. For one thing, there’s a very real chance you haven’t been able to get a PS5. Semiconductor shortages have kept the supply of new consoles to a trickle, keeping many people waiting. For another thing, there are few PS5 exclusives as of yet. Yes, Resident Evil: Village has gamers salivating. But the new God of War doesn’t release until the fourth quarter. And most other exclusively next-gen titles have been pushed back to 2022 or later. Thanks, Covid!

The point being, even for serious technophiles, there are plenty of reasons to keep your PS4 for awhile. One way of doing that is to make sure it stays cool while it’s running. Today, we’ll be reviewing two of the best PS4 external cooling fans we could get our hands on. We’ve reviewed Xbox One, One S, and One X cooling fans in the past. So we have a good idea what we’re looking for. We’ll start by reviewing the ElecGear PS4 Turbo Cooling Fan. This is a simple, 5-fan unit that clips onto the back of a standard PlayStation 4. Next, we’ll look at the OIVO Cooling Stand. This is a vertical stand that fits the PS4 original, Pro, and Slim, and also charges your controllers. Let’s take a closer look! 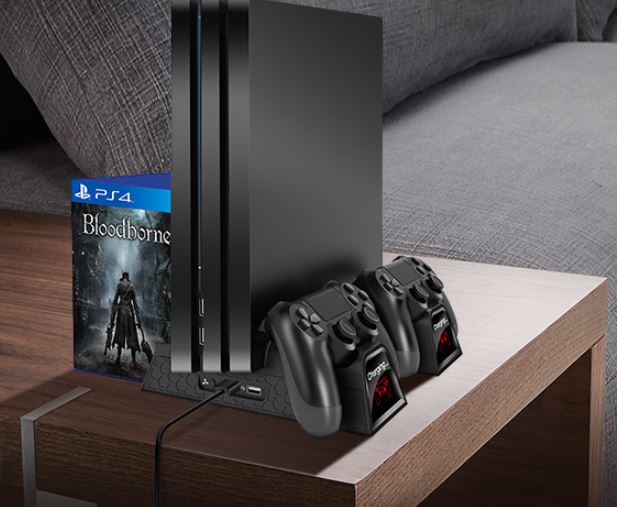 Should I Use an External Cooling Fan for my PS4?

Before we talk about which external fan is better, let’s talk about whether you should be using one or not. There’s a lot of misinformation out there about PS4 cooling fans, and we should clear some things up. To begin with, we should acknowledge that the people at Sony know what they’re doing. They’ve been making cutting-edge electronics for decades, and the PS4 is a fantastic system. Simply put, they didn’t go and make a dumb mistake like not providing enough cooling. If the PS4 constantly overheated and caused problems, it wouldn’t have sold over 115 million units.

That said, it’s possible for a PS4 to overheat. In fact, there’s thermal protection circuitry for exactly that scenario. If the console gets too hot, the picture will shut off. The red light will come on, you’ll hear three beeps, and then the entire system will power down. It’s pretty unmistakable.

So, what might cause your PlayStation 4 to overheat? One answer is that the operating temperature is too warm. Sony recommends that the PS4 only be used between 41 and 95 degrees Fahrenheit. Optimally, they recommend between 50 and 80 degrees. For most people’s homes, this should be a non-issue. But then again, there are exceptions. For one thing, your air conditioner might be broken. For another thing, you might be trying to game outdoors, or on a three-season porch. In that case, it can be helpful to have a little more cooling power.

However, there are limitations to what an external fan can do. First and foremost, it’s only as effective as the surrounding air is cool. If it’s 95 degrees out, there’s no way that ambient air can cool your system below 95 degrees. If your system is less than 95 degrees, blowing more air on it will actually heat it up! In practice, ambient air alone will never damage your console. The heat would be dangerous to you far before it posed any threat to your PlayStation. But there’s only so much you can do when you’re literally blowing hot air.

No matter what the surrounding temperature, make sure your console has plenty of clearance around it. A PS4 that’s boxed in on all sides is going to have its airflow restricted. Open things up and let your fans do their work. Along the same lines, it’s essential to keep your console clean. It doesn’t matter how powerful your fan is if your vents are clogged up with dust. If you’re having temperature problems, the very first thing you should do is make sure your system is clean. All too often, a $5 can of air duster can put an end to your troubles.

If you’re a PC gamer, stress testing is easy. You look up the temperature ratings for your processor and graphics card. Then, you run stress testing software and see how hot your components get. Unfortunately, Sony doesn’t provide any temperature ratings for the PlayStation 4. There are some shady, third-party apps that will measure your GPU temperature. But they’re difficult to use and their data is questionable. The community has figured out that an infrared thermometer at the vent can read at least 135 degrees without trouble. As long as your console is running cooler than that, you’re just fine. If it’s not, consider an external cooling fan.

To stress test your PS4, you need to get your hardware working, particularly the GPU. The harder you work your system, the higher you’ll push the system. Choose a graphically demanding game like Ghosts of Tsushima or Destiny 2, and play for a few hours. Do this in the hottest environment you expect to use your console in. Then, check the temperature at the vent. If your system isn’t overheating now, you’re just fine. If not, it would be wise to invest in a cooling fan. 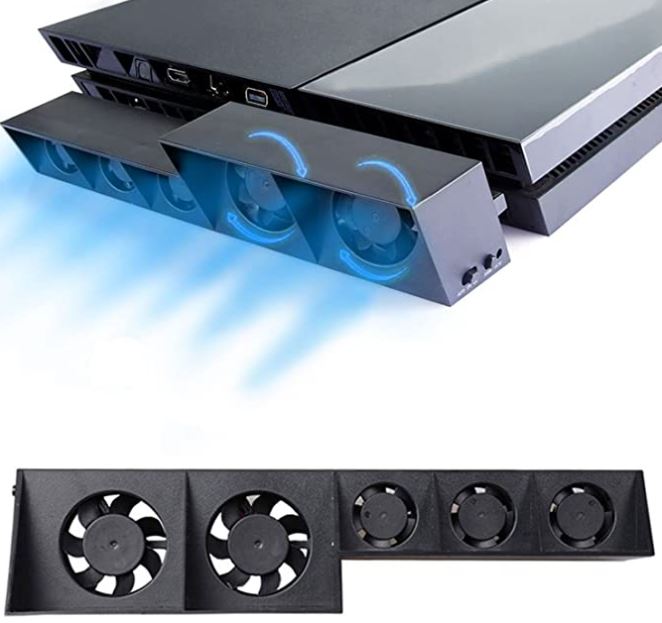 ElecGear is an experienced manufacturer of console cooling fans. We’ve reviewed their Nintendo Switch dock controller, and we liked its design. So ElecGear was on our short list of manufacturers to look at for a good PS4 fan. Their PS4 Turbo Cooling Fan did not disappoint us. It’s designed to take up as little space as possible, and attaches directly to the back of your PS4. You literally clip it into the back of your console, without any tools or other complications. Just press down firmly until it clicks. Because of its design, this fan will attach only to the original PS4. It won’t attach to the PS4 Pro or PS4 Slim. 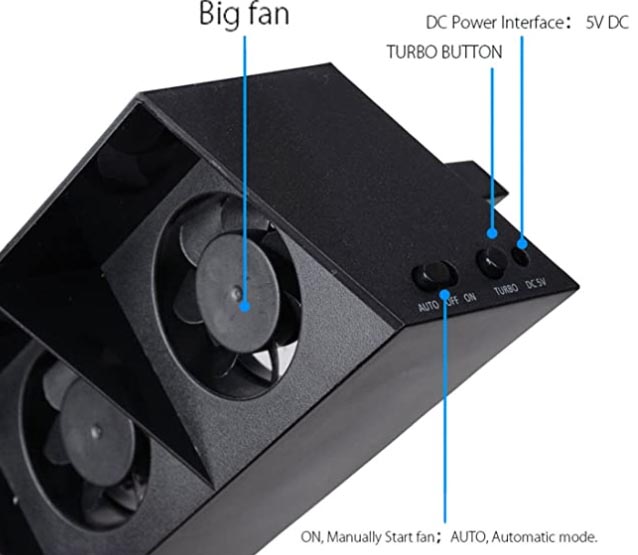 Cooling power is provided by a row of five fans. Two large fans occupy the right side of your console, blowing air over the motherboard and the GPU. A row of three smaller fans occupy the lower half of the left side, leaving your ports accessible. These blow air over the optical drive and power supply. 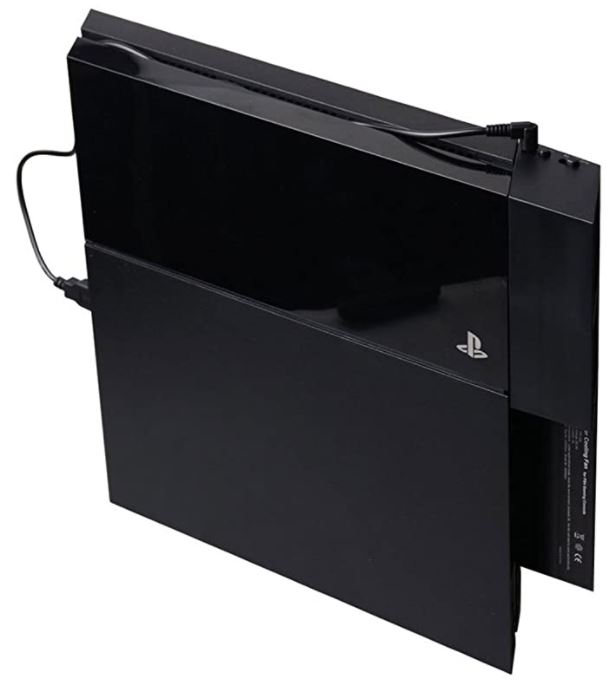 The fans are controlled by a three-way power switch, located on the right side of the unit. The right two settings are on and off, which are self-explanatory. The leftmost setting is auto mode. In this mode, the fan will automatically shut off when the temperature is below 38 degrees Centigrade – about 100 Fahrenheit. This allows for a modest amount of power savings. On the flip side, there’s also a turbo buttons, which runs your fans continuously at maximum speed. 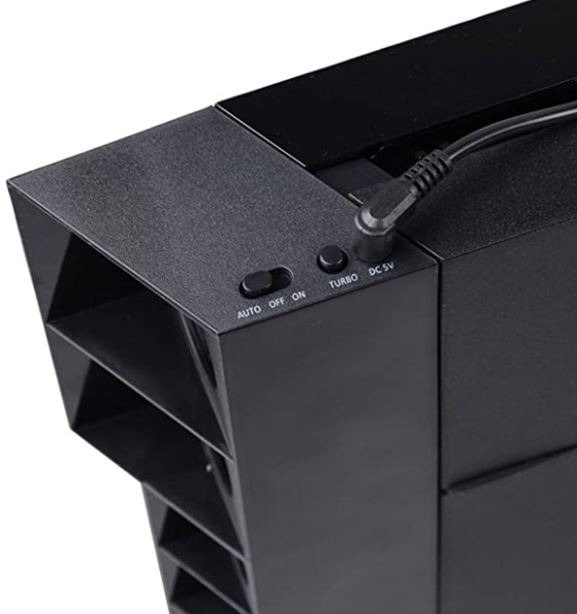 Alongside the switch and the turbo button, you’ll see a round DC power input. This connects to your PS4 with a USB Type-A to male DC cable, which is included in the kit. We have to say, the decision to use this unusual adapter is bizarre. Why not just use a Type-A to Type-C patch cable, which is easily replaceable? As is, if the cord gets lost or damage, it will be difficult to replace. 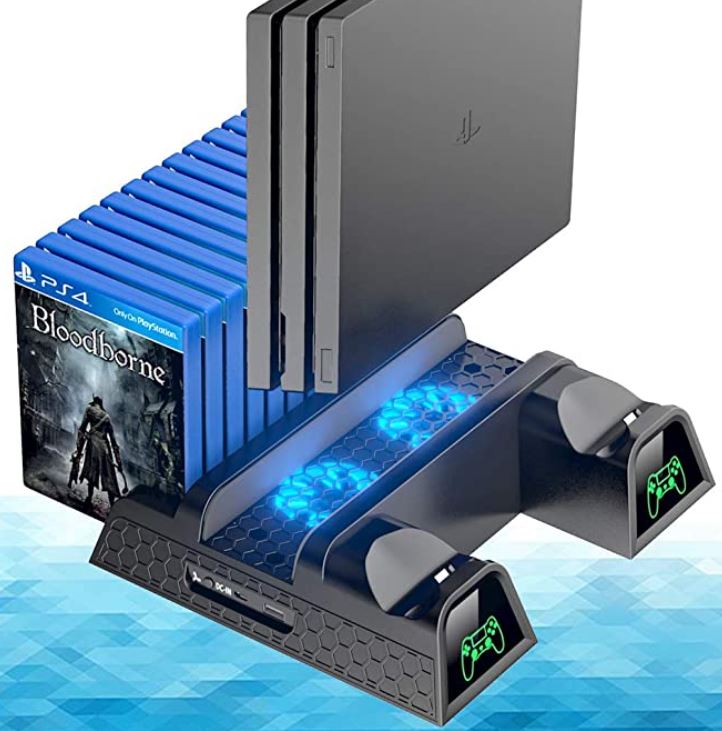 OIVO is another established console manufacturer, and we recently reviewed their PS5 USB hub. The OIVO Cooling Stand is a flat, mostly plastic stand that’s designed for your console to sit inside vertically. It retains your PS4 in a rubberized channel that’s designed to prevent scratching and damage. The base version will fit the PS4 and PS4 Pro, while an adapter is included for the PS4 Slim. 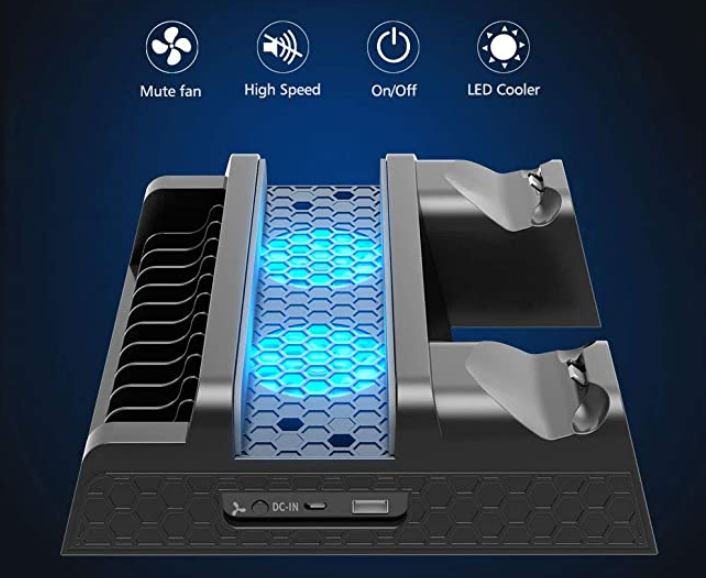 In the bottom of this slot, you’ll see a pair of built-in fans, which blow air right into the bottom of your console. When in operation, these fans glow with an attractive blue LED lighting, which matches the PS4’s aesthetic. They blow air over a metal plate on the bottom of the housing, which helps dissipate heat quickly. The fans are controlled by a simple power button, located on the left side of the housing. In this same general area, there’s a USB Type-C port for powering the stand. The kit includes a Type-A to Type-C cable, so you can plug right into your console. 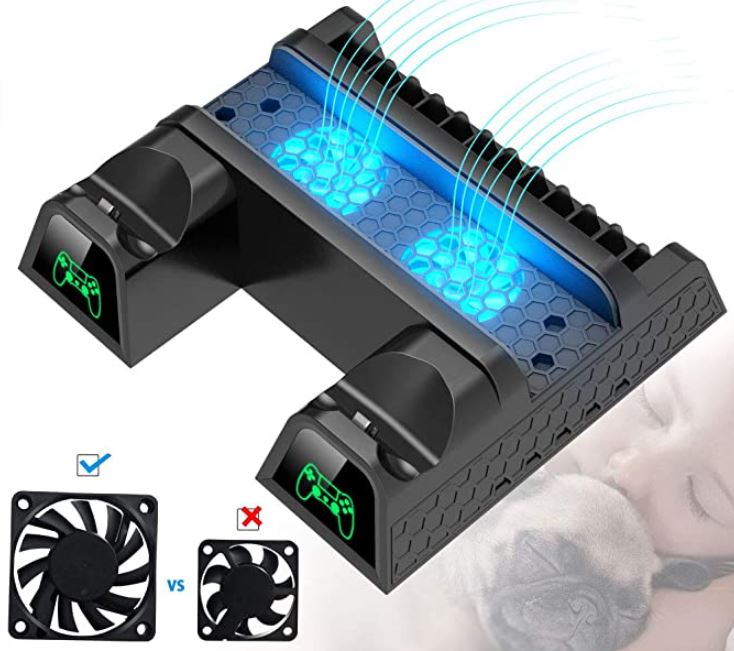 On the front of the housing, there are a pair of controller chargers. These are simple, slanted brackets where your controllers sit and charge on a USB plug. In total, they charge in about four hours, or 2 ½ hours if you’re only charging a single controller. The front of each bracket sports an attractive, controller-shaped LED. The LED glows red when a controller is charging, and green when fully charged, so it serves as an indicator. The back of the housing also has a dozen slots, suitable for storing games. This is a convenient way to keep your favorite titles at arm’s reach. 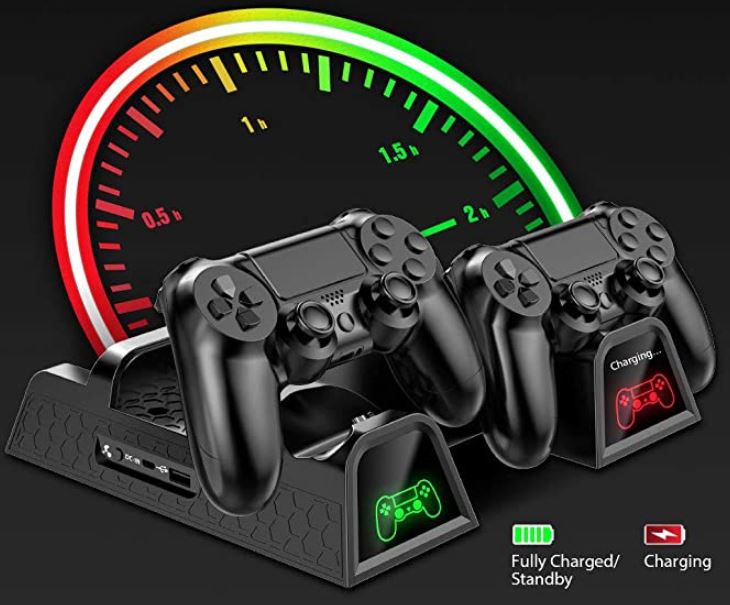 So, which one of these cooling stands is the best? We started out by looking at the ElecGear PS4 Turbo Cooling Fan. This fan is compact and well-engineered. However, all it does is cool your system, and it only works with the original PlayStation 4. On the upside, it’s compact, so it’s useful for applications where space is an issue.

That said, the OIVO Cooling Stand is a better value for most people. The main reason is that it includes a pair of controller chargers, sparing you the need to make another purchase. And even when your cooling fan isn’t running, the chargers will still provide some value. In addition, this stand supports all three variants of the PlayStation 4. On the downside, you’ll need a bit of free space to get it set up.