These days, we use USB chargers more than ever before. On the one hand, you can chalk this up to people relying on their electronics more than ever. And there’s a lot to that. But just as importantly, USB is becoming more and more of a universal standard. A few years ago, the only things that used USB power were phones and external hard drives. Now, smartphones, tablets, and even many laptops are using USB power. And with devices drawing less and less power, you can expect to see even more USB charging as time goes on. All of this to say that everyone should own a good charger or three.

In most cases, a traditional multi-charger will get the job done just fine. But there are situations where an ordinary charger’s profile causes problems. What if you’re trying to plug into an outlet behind your desk, for example? Routing the cables can become a headache, and will force you to position your desk away from the wall. One solution is to use a thin, flat wall charger, which is what we’ll be looking at today. These chargers come from different manufacturers and offer different features, but they have one thing in common. All of them boast a slim profile, with the cables plugging into the bottom instead of the front.

We’ll be exploring three options today, starting with the Nekmit Thin & Flat USB-C Charger. This is a combination charger with one USB Type-C port and three Type-A ports. Next, we’ll look at the Top-Up Ultra-Slim USB-C Wall Charger. This charger is the slimmest of all, under half an inch thick, but comes with only two ports. Third, we’ll examine the iHome 2-Port USB-C Wall Charger. This charger has a curved profile, and can be ordered in two different configurations. After we’ve evaluated all three of these chargers, we’ll go over what we’ve learned, and render our verdict. Let’s see how they compare! 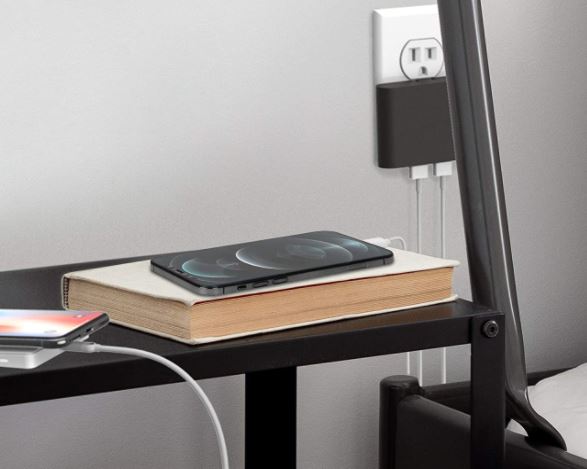 Before we look at any chargers, let’s talk about what you should – and shouldn’t – expect from a USB charger. USB was originally designed for data. Its ability to carry power was purely incidental, but some manufacturers took advantage. Early USB ports offered less than one watt of power, but it was enough for very small devices. In response, developers created USB 2.0, which provided a standard 5 volts of power at 0.5 amps. This works out to 2.5 watts, and remains the standard for basic USB data ports to this day.

Most dedicated chargers and some computer USB ports offer enhanced power capability. The USB 3.0 standard calls for 0.9 amps, or 4.5 watts. The USB 3.1 standard has been further enhanced, and usually offers 2.1 amps, or 12 watts. Therefore, it’s capable of a lot more, which is why you really need to pay attention when you’re buying. To begin with USB Type-A ports are capable of up to 36 watts with Quick Charge 3.0. This goes up to 100 watts with the newer QC 4.0 protocol. USB Type-C ports are also capable of up to 100 watts using the Power Delivery, or PD standard.

So, how much power do you need? It largely depends on your device. Most smartphones charge at a maximum rate of 18 watts, so anything more than that is superfluous. However, larger devices can accept larger amounts of power. Many tablets draw as much as 36 watts. And those 100-watt chargers are necessary for some larger laptops, if you want to charge while you’re using them. If you don’t need to use your device while it’s charging, any USB device will charge on any port. Larger devices simply won’t charge as quickly on a lower-wattage charger as they would on a more powerful one. 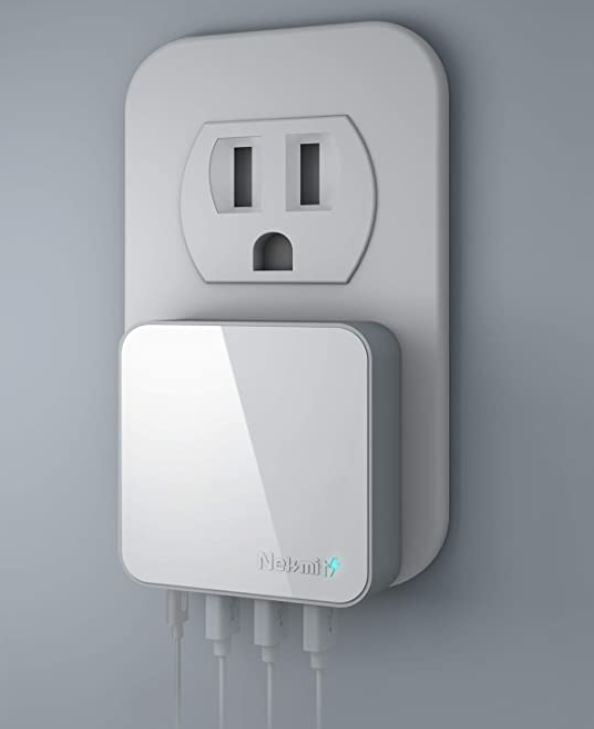 Nekmit is a respected manufacturer we’ve reviewed in the past. At the time, we were looking at their leather desk pads, and we were impressed with their quality. So we were happy to take a look at their Thin & Flat USB-C Charger. Much like their desk pads, the quality of the material impressed us. This is an affordable charger, but it’s built like something a bit more upscale. It’s available in red or white, with matte sides and a high-gloss surface with a Nekmit logo. Next to the logo, there’s a little blue lightning bolt LED that illuminates when the charger is plugged in. 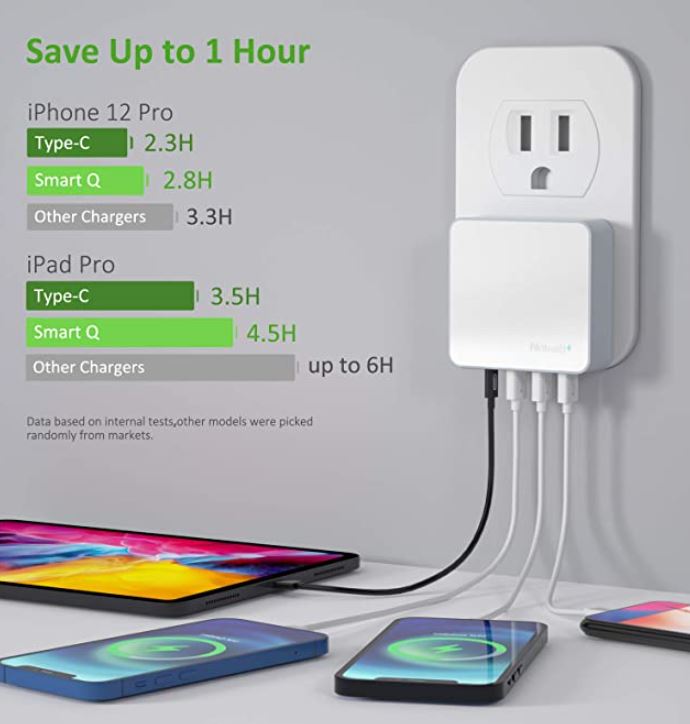 The housing has a roughly square profile, and measures 2.7 inches wide, 2.5 inches high, and 0.8 inches thick. The corners are rounded off, which prevents it from jabbing you if it’s in your pocket. Unfortunately, you probably wouldn’t want it in your pocket, since the prongs don’t collapse. 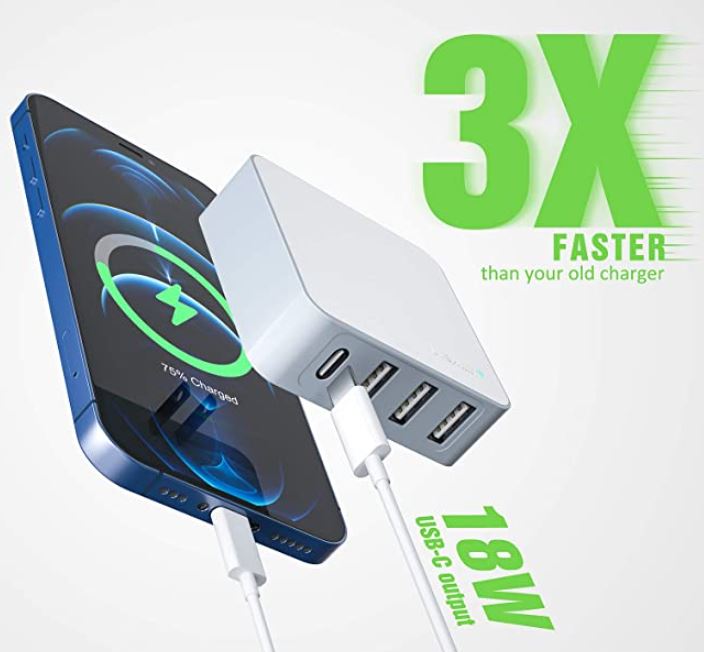 On the bottom, you’ll find four USB ports with a different form factor and power ratings. At the left, there’s a single USB Type-C port. This port is a PD port, with a rating of 18 watts. It’s not the fastest on the market, but it’s sufficient for any smartphone. To the right, there are three USB Type-A ports, all of which are capable of providing 12 watts of power. That said, the three of them operate on a shared circuit with a total of 24 watts. If you have one or two devices plugged in, you’ll get the full 12 watts. If you plug in three devices, each port will instead max out at 8 watts.

In addition to its multiple ports, the Nekmit charger also includes a handful of safety features. Internal circuitry protects against overcharging, overheating, and short circuiting. You won’t have to worry about your devices getting damaged due to a faulty power supply. All of this is protected by a 12-month manufacturers warranty, which covers materials and workmanship. 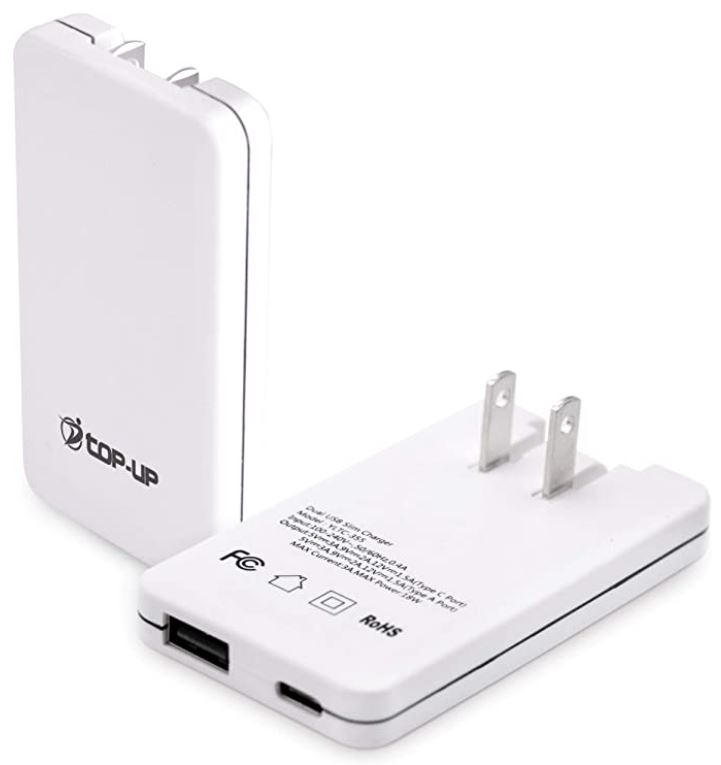 The Top-Up Ultra-Slim USB-C Wall Charger is impressive mostly because of its slim profile. At less than half an inch thick, you really can slip this one in your pocket. To compliment this ultra-slim design, it also sports a pair of folding prongs that collapse easily for transport.

Its other dimensions are 3.4 inches high and 1.9 wide, so the whole thing is about the size of a credit card. The white plastic housing has a matte finish, which is easy to dust off and keep clean. The corners are also rounded, much like the corners on the Nekmit charger. The words “Top-Up” are printed on the front, alongside the company’s logo. Other than that, this charger is totally plain. 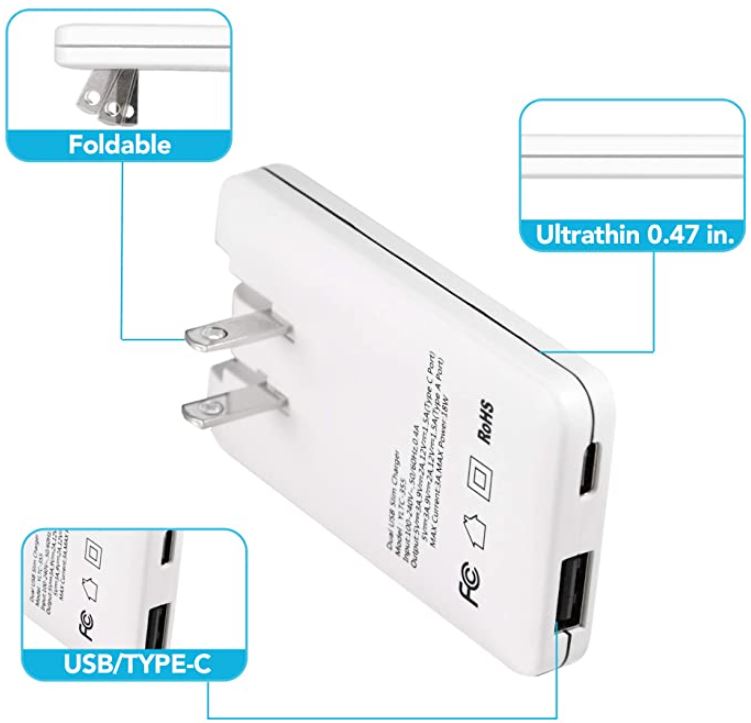 The two USB ports are located on the bottom of the housing. To the left, there’s a USB Type-C port that’s capable of providing 18 watts of PD power. Alongside it, you’ll find a USB Type-A port, which provides a similar 18 watts of power via QC 3.0. This makes the Top-Up charger a fine choice for charging almost any Android or iPhone.

That said, it’s really only useful for charging a single phone. The 18 watt maximum for each port is the same as the maximum for the entire charger. If you plug in two devices, they’ll have to split that wattage between them. As a result, your charging performance will suffer. 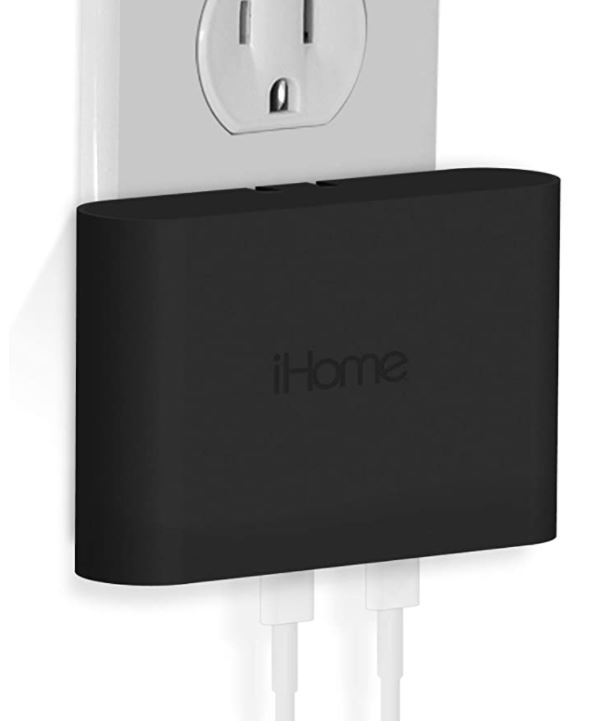 The iHome 2-Port USB-C Wall Charger has a slightly different profile than the last two. While its top and bottom are flat, the sides are curved, creating a shape that’s oval rather than rectangular. This makes it attractive to look at, albeit a bit fatter than the others. Even so, it’s only about ¾ of an inch thick, so it’s certainly low profile enough for most purposes. The front surface is flat, and measures 3.14 inches in width and 2.32 inches high. Like the Top-Up charger, this one comes with folding prongs that can be collapsed for travel. 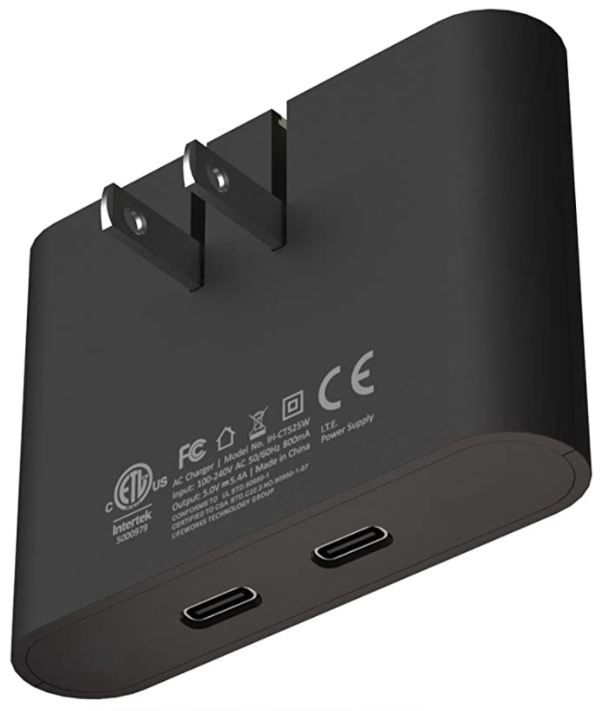 The oval profile was only one of the reasons we like the iHome charger’s aesthetic. In addition to a smooth shape, it also sports an attractive matte finish. You can order it in black or white to meet a variety of tastes. But there’s something incredibly slick about the matte black version. Both colors are easy to keep clean, with a glossy iHome logo embossed on the front.

There are actually two different versions of the iHome charger available. The first has a pair of USB Type-C ports, both of which provide 18 watts. Better yet, both can be used simultaneously at full power. The second variant comes with one 18-watt USB type-C port and a pair of Type-A ports. On this version, the two Type-A ports share an 18-watt circuit. If you’re charging two devices, they’ll need to split the power. 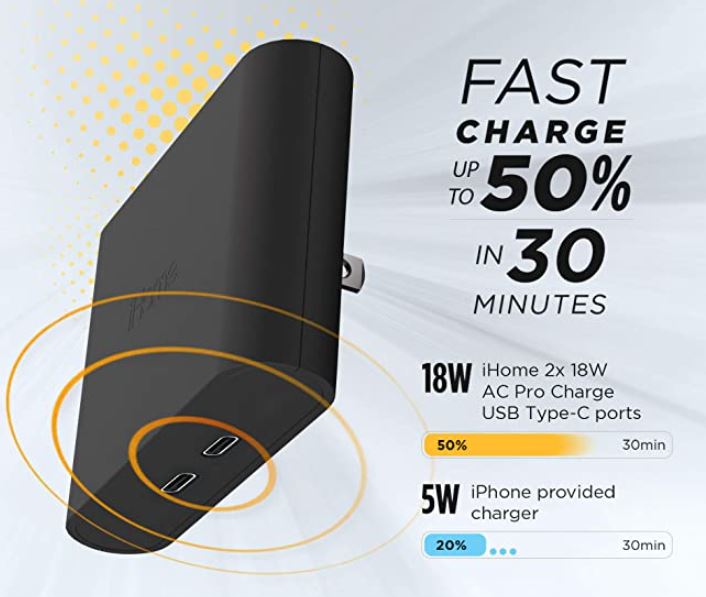 The iHome charger comes with all the protection measures you expect from a modern USB charger. These include overcharge and overvoltage protection to keep your phone safe. Short circuit protection will also prevent damage due to damaged wires.

The Nekmit Thin & Flat USB-C Charger is the most robust of the bunch in terms of the number of ports. With three USB Type-A ports, you’ll be able to plug in up to four devices altogether. However, this is somewhat misleading. With a total limit of 24 watts for the Type-A ports, your performance will be limited when charging three devices.

The Top-Up Ultra-Slim USB-C Wall Charger is the slimmest of the three choices. At under half an inch, it’s about as thin as it’s physically possible to build a USB charger. And with a pair of folding prongs, it’s easily portable wherever you want to take it. It also allows you to charge both Android and iPhones at a full 18 watts. Unfortunately, the entire charger also has the same 18-watt maximum.

The iHome 2-Port USB-C Wall Charger stands out from the pack in two respects. First, it just looks nice. If you’re a professional using it in your office, it will go with the formal setting. In addition, it offers true dual 18-watt charging. If you want to get full power while charging two phones, you’ll be able to do that. You can also order it with a Type-A port for iPhone charging.