When it comes to electronics, there are some things manufacturers just can’t seem to agree on. Cable standards are one of those things. Apple likes the Lightning adapter. Some Android manufacturers are still using Micro USB rather than USB Type-C. Full-sized computers and peripherals are no exception.

Some peripherals are widely compatible, and plug into your USB Type-A port. Others require USB Type-C, and many Mac-specific devices use a Lightning cable. On the device end, even USB devices aren’t always standard. Some have a USB Type-B plug. Others will have a proprietary plug.

Beyond all that, there are some less-common standards you may not have heard of, such as eSATA. eSATA was designed to be an extension of traditional SATA technology, used for peripherals. Basically, it was a competitor to the USB and Lightning standards. You won’t see it a lot today, but for a few years in the late aughts, it was actually somewhat common.

Now, let’s say your Uncle Larry passed away, and you’re going through his possessions. You find a 13-year-old camcorder that hasn’t been used in a decade. But instead of a USB cable, it has a weird, flat cable that doesn’t plug into your computer. You ask some family members to take a look at it, and no-one else recognizes the cable either. Are Uncle Larry’s family videos lost forever?

Not necessarily. The plug you’re looking at is probably an eSATA plug. Fortunately, you don’t need an eSATA port on your computer it use your old device. Instead, you can use a USB to eSATA adapter cable, and plug it into your computer’s USB port. This makes it easy to recover old files, and even use older devices that are still in good condition.

We’re about to review three of the best USB to eSATA adapter cables on the market. Each of these cables is well-engineered, and offers high enough transfer speeds for any application. That said, there are some important differences between the three. To find the best one, we’ll have to consider several factors.

Some of these factors are obvious, such as the length of the cable. Durability is another major concern. But we’ll also have to talk about compatibility with different types of eSATA devices. After all that, we’ll have enough information to deliver a fair verdict. Let’s get started, and see what we learn!

StarTech.com is one of the better-known manufacturers of computer parts and accessories. Not long ago, we reviewed their VDSL2 Ethernet Extender Kit. As with most of their offerings, it performed admirably. So when we were looking for a good adapter, it made sense to try theirs out.

The StarTech.com 3 ft USB 3.0 to eSATA adapter is a 3-foot cable with a fat, round profile. It has a USB Type-A port on the PC end, with a flat eSATA plug on the device end. And thanks to the fat profile, we’re reasonably confident that it can take a beating. 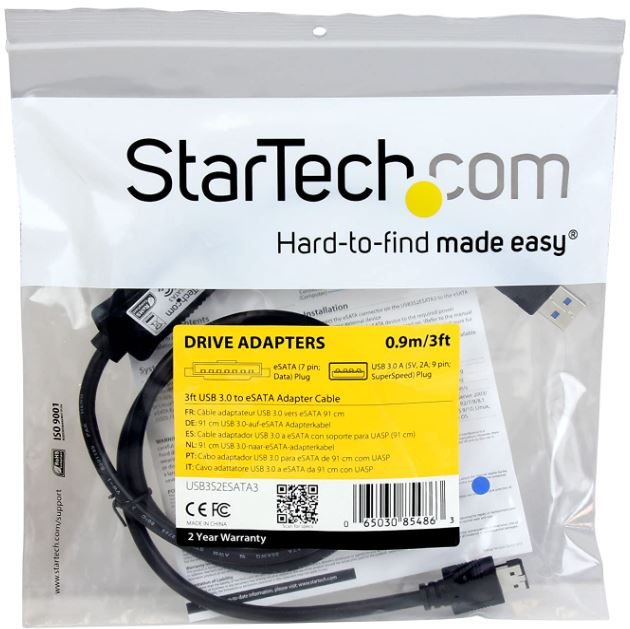 The connections at the base of each plug are very well-reinforced. There’s a thick rubber shield that allows for a slight flex, without putting undue stress on the cable. You’ll find similar reinforcement where the cable connects to the in-line converter fob. This houses the circuitry that adapts the signal from USB to eSATA and vice-versa.

This cable supports data transfer rates as high as 5Gbps. That’s assuming you’re plugged into a USB 3.0 or 3.1 port. Regardless, you’re getting very high transfer speeds that will exceed anything your eSATA device can handle.

It’s important to keep in mind that this is a data-only cable. It supports standard eSATA devices that don’t require power. It doesn’t work with eSATAp devices. We’ll explain the differences in a little bit. 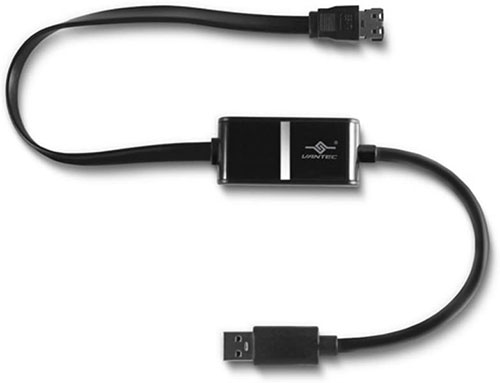 Vantec is another well-known brand that produces a variety of PC accessories. We recently reviewed their PCI expansion slot cooling fan, and it performed very well. So we decided to see how their USB to eSATA adapter compares to the competition.

The Vantec NexStar eSATA 6Gb/s to USB 3.0 adapter is another USB Type-A to USB Type-C cable. However, it has a flat cable rather than round, which makes it harder to tangle. It’s also shorter, at only around 18 inches, including the converter fob in the middle. If you only need a short adapter cable, you won’t have a bunch of extra slack. 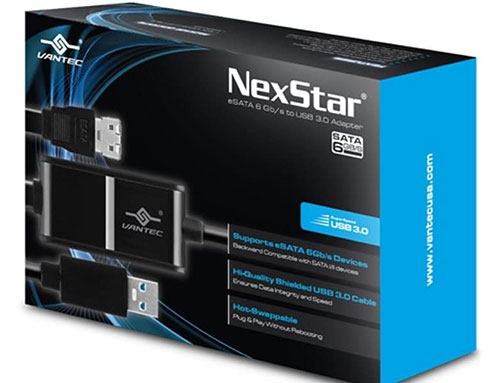 Despite the slim profile, this cable is well shielded. You don’t have to worry about everyday interference degrading your transfer speeds. That said, the maximum transfer speed of 6Gbps is a bit misleading. On USB 3.0, that’s capped to 5Gbps. And as with the last cable, it’s still fast enough that speed becomes irrelevant.

The Vantec cable has something else in common with the last one; it supports data transfer only. You can’t use it with an eSATA device. 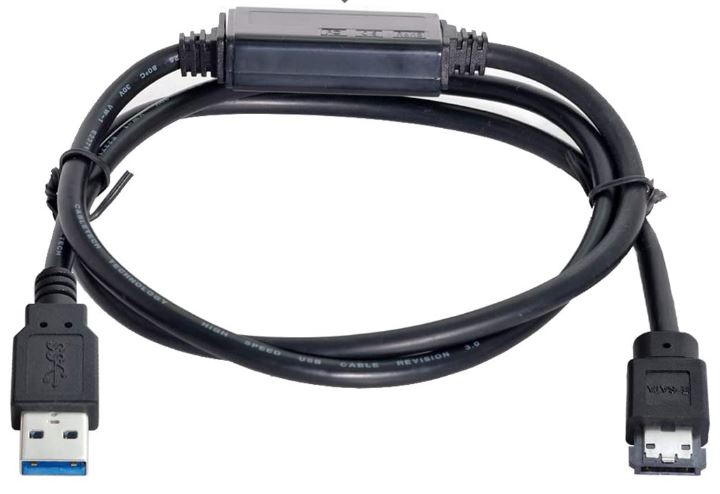 The CY USB 3.0 to eSATA adapter comes in two different variants. The first is a USB Type-A to eSATA, similar to the last two. The second is a USB Type-C to eSATA. Other than which port on your computer they connect to, these two variants are identical. But some modern laptops have a limited number of Type-A ports, so a Type-C adapter could be useful. 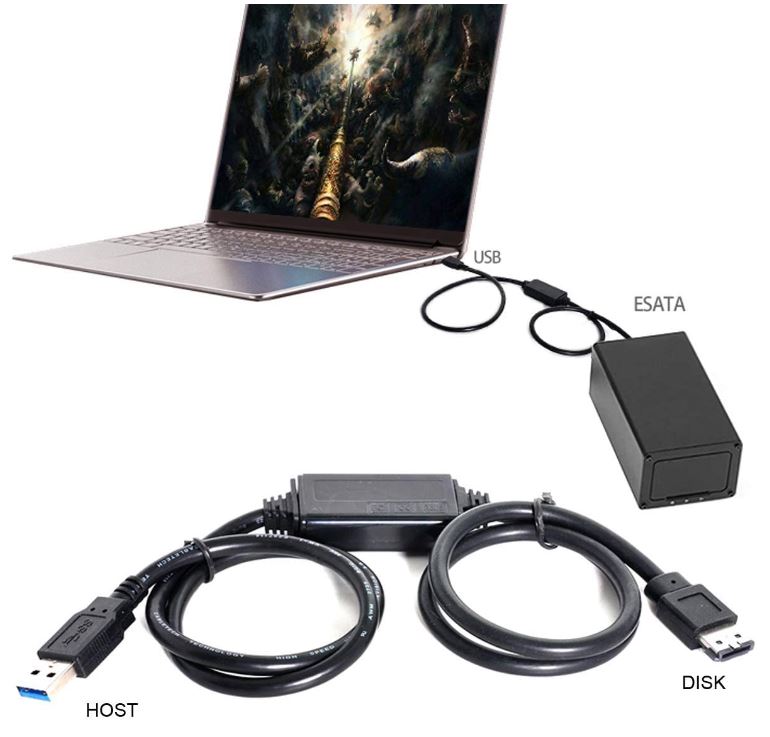 The cable is 39 inches long, with a round profile and an in-line adapter fob. It’s not quite as tough as the StarTech cable, but it’s still reasonably beefy. It’s reinforced at the plugs, as well as where it meets the adapter fob. You don’t have to worry about it getting damaged from ordinary everyday use.

Using a USB 3.0 port, the CY cable supports transfer rates of up to 5Gbps. As before, this is more speed than you’ll ever need. However, this cable also provides 5 volts of DC power from your USB port. This allows you to run eSATAp devices that the other cables won’t power. As a result, you’ll be able to work with a wider variety of devices. For example, many external hard drives require a powered connection.

eSATA was first created in 2008, and was used on many computer peripherals. Developers continued to improve it through 2011, releasing newer, faster versions of the protocol. Unfortunately, PC manufacturers weren’t as fond of the format as device manufacturers. Nobody was selling computers with eSATA ports, so you had to buy and install your own aftermarket card. This was a pain, so eSATA dwindled in popularity, and people mostly stopped making eSATA peripherals.

Nowadays, eSATA is mostly obsolete, and only used for some niche applications. But an adapter can still be useful if you need to connect older devices.

As for the ports themselves, there are two versions. eSATA and eSATAp ports are identical. The only question is whether the device draws power, and whether the cable supports it. The eSATApd port is a fatter design, with two extra contacts on the side. These provide the 12-volt power connection. Because of the different design, eSATA and eSATAp cables won’t work with an eSATApd port.

How Fast Is eSATA?

eSATA comes in different versions, which affects your maximum transfer speed. It actually doesn’t depend on the device or the port. It depends on the internal circuitry in your motherboard that handles the signal. Older versions of eSATA were slower. For example, eSATA 1.5 supported transfer speeds at a modest 1.5Gbps. The current version, eSATA 3.0, offers 3Gbps of transfer speed.

That’s slow compared to USB. USB 3.0 offers 4.8Gbps of transfer speed, and USB 3.1 offers 10Gbps. For this reason, USB is a better connection method for most purposes. For external SSDs in particular, it only makes sense to use the fastest possible connection. Even if eSATA had caught on, it wouldn’t be an ideal protocol.

That said, there are still some niche applications for eSATA. High-security enterprise environments often use computers with no USB ports. This prevents anyone from plugging a thumb drive into a PC and stealing trade secrets. But these enterprise users still need a way to connect their devices. You’ll still find eSATA in these environments, precisely because it’s an uncommon format. If you get your hands on some retired enterprise equipment, you may need an eSATA cable to connect it.

Final Verdict – Which USB to eSATA Adapter is Best?

So, which of these USB to eSATA adapter cables is the best? It depends on what you need. The StarTech.com 3 ft USB 3.0 to eSATA Adapter is a straightforward 3-foot adapter cable. It’s probably the toughest of the bunch, with plenty of reinforcement in vulnerable areas. If you only need to run an ordinary eSATA device, it’s everything you need.

The Vantec NexStar eSATA 6Gb/s to USB 3.0 Adapter is the fastest option. But as we mentioned, the speed difference is really irrelevant. The real advantage of this cable is its short, flat design. If you want a short cable and easy cable management, it’s an excellent choice. Just make sure you don’t need a powered cable.

The CY USB 3.0 to eSATA Adapter is reasonably durable, and the 39-inch length gives it plenty of reach. Most importantly, it supports 5-volt power transfer for eSATAp devices. This gives you versatility to connect devices that won’t work with the other cables. Not only that, but the USB Type-C option lets you use it with laptops without a free Type-A port.